New York Rangers vs Flyers matchup: Back on the East Coast

The New York Rangers will face the Philadelphia Flyers for the second time this season. This will be the fifth and final game of their longest road trip of the season. Gerard Gallant, Ryan Reaves, and Julien Gauthier cleared COVID protocol and expected back tonight.

The Blueshirts beat the Flyers 4-1 earlier this season. They are 4-2-1 in their last seven matches against Philadelphia.

Rangers that can ground Flyers:

Mika Zibanejad – 35 GP, 13G-14A=27 PTS – Zibanejad has points in six-straight games against the Flyers, including back-to-back six-point games on March 17 and March 25.

Point Distribution: The Blueshirts are one of three teams (Colorado Avalanche, Tampa Bay Lightning) in the NHL to have 4 players with at least 30 points (Fox 37, Panarin 36, Zibanejad 34, Kreider 34).

Road Warriors: This will be the Rangers 24th road game of the season, which is the most in the NHL. After this trip, 26 of the final 43 games will be at MSG.

Adam Fox’s 37 points is ranks third in scoring among defensemen.

Mika Zibanejad has 8 goals in his last 10 games 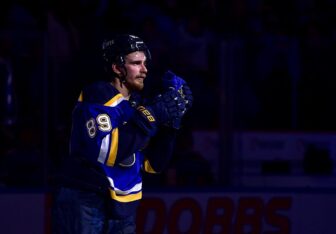 Chris Kreider is 1 point from passing Tomas Sandstrom for 18th in all-time team scoring (380), and 2 PPG from tying Mark Messier for 8th all-time in team history (72).

Mika Zibanejad is 1 overtime goal away from tying Cecil Dillon, Butch Keeling and Brian Leetch (7 each) for the most overtime goals by a player in Rangers history. 1 SHG to tie for top 10 in shorthanded goals. 1 goal from 150 as a Ranger. 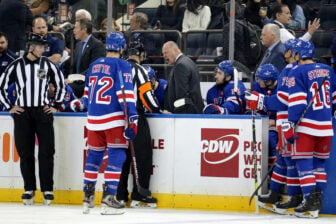