NHL comes down hard on Russia, plus IIHF and IOC take action

The NHL condemns Russia invasion of Ukraine and said Monday it was suspending its business partnerships in Russia and pausing its Russian language social and digital media in response.

Russia, led by president Vladimir Putin, began an invasion of Ukraine last week. It has drawn the nation global condemnation and sanctions, including in the world of sports.

The NHL also announced it would no longer seek to hold “any future competitions” in Russia. The league sometimes holds regular-season or exhibition games in Europe, last holding an exhibition in Russia in 2010.

“The National Hockey League condemns Russia’s invasion of Ukraine and urges a peaceful resolution as quickly as possible,” the league’s statement said. “Effective immediately, we are suspending our relationships with our business partners in Russia and we are pausing our Russian language social and digital media sites. In addition, we are discontinuing any consideration of Russia as a location for any future competitions involving the NHL.

“We also remain concerned about the well-being of the players from Russia, who play in the NHL on behalf of their NHL Clubs, and not on behalf of Russia. We understand they and their families are being placed in an extremely difficult position.”

The league acted after the International Ice Hockey Federation sanctioned Russia and Belarus, which is supportive of the invasion, banning both nations from upcoming world championship tournaments.

Russian NHL players themselves have come under fire amid the invasion, with goaltending great Dominik Hasek of the Czech Republic recently arguing that the NHL should suspend the contracts of all Russian players.

Some Russian NHL players have been critical of Putin, such as New York Rangers forward Artemi Panarin. Others are avid Putin supporters, including Washington Capitals star Alex Ovechkin. On Friday, Ovechkin, whose family still lives in Russia, said he was against the war.

According to QuantHockey, there are 55 Russian players who have appeared an NHL game this season. 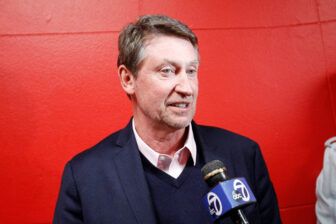 The International Ice Hockey Federation held a meeting on Monday to condemn the military action taken by Russia against the Ukraine.

Per the IIHF Council release they’ve decided to take the following actions:

-Withdrawal of the 2023 IIHF World Junior Championship hosting rights from Russia
These two actions have been initiated by the Council in order to enable the IIHF to ensure the safety of IIHF Championships and all participating players, officials, and fans.

“The IIHF is not a political entity and cannot influence the decisions being taken over the war in Ukraine,” said IIHF President Luc Tardif in a statement. “We nevertheless have a duty of care to all of our members and participants and must therefore do all we can to ensure that we are able to operate our events in a safe environment for all teams taking part in the IIHF World Championship program.”

The IIHF is looking for a suitable new host for the 2023 World Junior Championship.

“We were incredibly shocked to see the images that have come out of Ukraine,” added Tardif. “I have been in close contact with members of the Ice Hockey Federation of Ukraine and we hope for all Ukrainians that this conflict can be resolved in a peaceful way and without the need for further violence.”

Related: Gretzky and Hasek call for action against Russia

IOC Calls for ban on Russia

The International Olympic Committee on Monday called for a worldwide ban on Russia and Belarus from all international competitions in protest over the invasion of Ukraine.

U.S. Soccer has joined the ban while FIFA, the international governing body of soccer, is reportedly set to join in the ban as well.

The IOC’s executive board released a statement saying it was faced with a “dilemma which cannot be solved” over excluding athletes from Russia and Belarus due to actions of their respective governments.

“The current war in Ukraine, however, puts the Olympic Movement in a dilemma. While athletes from Russia and Belarus would be able to continue to participate in sports events, many athletes from Ukraine are prevented from doing so because of the attack on their country.”

With a “heavy heart,” the IOC released a six-point resolution that, in part, “recommends that International Sports Federations and sports event organisers not invite or allow the participation of Russian and Belarusian athletes and officials in international competitions.”

Belarus was included given its allowance of Russia to use the territory as a staging ground for military attacks on Ukraine.

However, if legal or logistical roadblocks prevented the ban, IOC said Russian and Belarusian participants should be made to compete as neutral athletes sans national flag, anthem or logos.

After at first declining to ban Russia over the weekend from international soccer competitions, FIFA is set to oust Russia from 2022 World Cup qualifying later Monday, according to multiple reports. UEFA is also meeting later Monday and is expected to follow the IOC’s lead and ban Russia from competitions. FIFA and UEFA are working together on a joint resolution, per the reports.

FIFA originally chose to make Russia compete as Football Union of Russia as punishment. However, Poland, Sweden and the Czech Republic have refused to compete against Russia. U.S. Soccer also released a statement against Russia in support of Ukraine.

“We will neither tarnish our global name, nor dishonor Ukraine, by taking the same field as Russia, no matter the level of competition or circumstance, until freedom and peace have been restored,” U.S. Soccer said.

The IOC also withdrew the Olympic Order issued to Russian president Vladimir Putin — and two others — in 2001.

The Rangers will need to make a decision on Alexandar Georgiev before the trade deadline. Plus multiple prospects garnering interest. Read More Here. 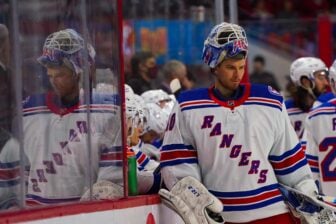 –This article also appeared at The Daily Goal Horn