Aug 13, 2020; Edmonton, Alberta, CAN; General view of NHL logo in the stands during the warmup period between the Dallas Stars and the Calgary Flames in game two of the first round of the 2020 Stanley Cup Playoffs at Rogers Place. Mandatory Credit: Sergei Belski-USA TODAY Sports

The NHL had teams open up their doors for testing and practice on Sunday. Since doing so, dozens of players have tested positive for COVID-19 which has caused six games to be postponed when play resumes on December 28.

Here’s the games that have to be rescheduled:

Prior to the break, Detroit Red Wings GM, Steve Yzerman raised an interesting question regarding testing before his team was shutdown.

While this has received some criticism, since he said it, several players have hopped on board with the suggestion.

The NHL had its teams open up yesterday and test all their players. What happened was over 40 players being placed on COVID protocol.

After Yzerman’s comments, he received a smattering of public support with Winnipeg Jets’ goalie Connor Hellebuyck and St. Louis Blues’ captain Ryan O’Reilly being the most prominent voices. After yesterday’s rash of positive tests, more spoke out.

“I can’t speak for everyone, but the feeling for myself … it’s a little overkill,” Hellebuyck said. “You see leagues like the NFL, who are adapting and, I think, doing things right.”

“I agree with those guys. We’ve got guys vaccinated, double vaccinated. Some guys aren’t showing any symptoms and they’re popping in COVID protocol,” O’Reilly threw in his support. “I think I’d like to see testing if you have symptoms but it’s not up to me. It’s a league and players decision.”

On Sunday, the Canucks’ Tyler Myers and Rangers’ Ryan Strome joined the choir looking for the NHL adapt.

“I saw Steve’s comments. My personal opinion is I completely agreed with what he said. I think he was bang-on,” Myers said. “I think as players the most frustrating part is seeing what other sports leagues are doing. It seems we’re heading the opposite direction of that. I think it’s a little confusing for us.”

A change in testing is unlikely

Enhanced protocols are in place until January 7 and they include daily testing. In addition, masks must be worn at all times by players and members of the team’s traveling party in club facilities and while on the road, and personnel must maintain physical distance while eating. Other rules include prohibiting team personnel from eating or drinking in indoor restaurants or bars open to the public.

The NFL eliminated weekly Covid-19 testing for vaccinated players who are asymptomatic. This is what everyone is referring to. However, it is unlikely to change.

The biggest difference between the NHL and other sports is the heavy travel between the US and Canadian border. Canada’s health officials are also much stricter than that of the United States. The NHL and NHLPA realize changes to testing would be a non-starter for health officials in Canada, so they continue to deal the best they can with the guidance in front of them. 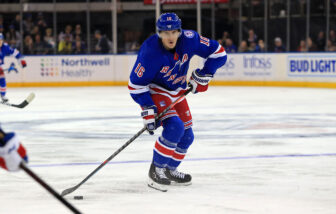 -Portions of this article first appeared at The Daily Goal Horn.