The viral photo of a dented Stanley Cup during the Tampa Bay Lightning boat parade caused quite a stir. Lo and behold the person responsible for the damage was the person holding the trophy in the photo.

Pat Maroon was on ESPN Radio to clear up what happened and to put an end to some critics saying the Lightning disrespected the Cup.

Pat Maroon on how Stanley Cup got damaged

“It was obviously raining and it was wet,” Maroon began to explain. “I went to lift it and I went flat backwards with it. I slipped.. the Cup went back on its end and people were saying we disrespected the Cup.”

That notion really upset the winner of three straight Cups starting in 2019 with the St. Louis Blues. The man is like a living hockey lucky charm, unfortunately the elements got him on this one.

“Such BS, because you know if they had half a brain, you know it’s wet outside,” Maroon said with hint of agitation. You think we’d be throwing the Cup around? No, we didn’t disrespect it. It was a complete accident, and we both got hurt. My back has been hurt all day today. But yeah, that’s what happened. Nothing crazy.”

Maroon went on to tell host Jamie Rivers that the picture made it look worse than what it was and that the Stanley Cup handlers told him it will be fine.

“They said it’s an easy fix,” he revealed. “It’s back in Tampa on Thursday. A quick fix.”

Maroon also wants to know who “framed” him. The photo that went viral was taken in the family section. Just another mystery to solve in this already busy offseason.

Today, the Stanley Cup’s social media account updated everyone on how it’s feeling. 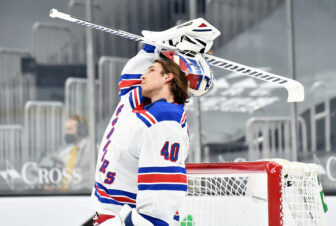