The Tampa Bay Lightning celebrated their second Stanley Cup Championship with a boat parade in Tampa. There was plenty of champagne showers, beer chugging, and hearty celebration going on. Of course, sometimes the partying is too hard for Ol’ Stanley but it’s never been career threatening.

The real Stanley Cup is safe in the Hockey Hall of Fame. Lord Stanley of Preston presented the Dominion Cup as it was originally called in 1893 to Montreal. It was given to the winner of the playoffs until it was replaced in the early 60’s.

Then NHL president Clarence Campbell felt the Cup was getting too old and brittle. He created a copy known as the “presentation Cup” which is still awarded today. While there is a third version on display in the Hall, the one that’s in the hands of the Lightning players has its battle scars.

In 1987, Mark Messier partied hard with a bunch of club goers in Edmonton who put dents all over the Cup. Mario Lemieux let is sit at the bottom of his pool in 1991, followed by Patrick Roy doing the same in 1993. In 1994, Mark Messier again decided to take the Cup out on the town and caused some serious damage that needed repairs as well.

But I don’t think it’s ever been this damaged before. I spoke quickly with Nick Kypreos who won the Cup with Messier in 1994. I showed him the photo and he simply said, “YIKES!” This from a man who witnessed the damage in 94 up close.

Somehow the Lightning managed to dent the top bowl so bad that one side came to a point. Of course, that did not end the celebration as people were still drinking out of the Cup.

As of now, the Cup is on IR and heading to Montreal for repairs. It will be ready for the ceremony this weekend. 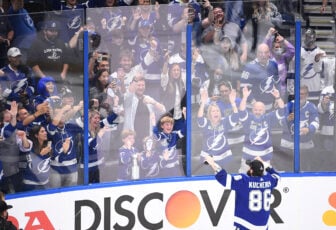 -This article was originally published at The Daily Goal Horn