The 2020-21 NHL season came to a close with a bang! Even before the Tampa Bay Lightning hoisted their second straight Stanley Cup, reports out of St. Louis have gifted winger Vladimir Tarasenko demanding a trade.

It’s going to be a busy summer, so let’s get up to speed as we now officially start the offseason.

“It’s so hard to win the Stanley Cup,” Lightning captain Steven Stamkos said. “And then you do it two years in a row. You deserve to go down in history. And this group, no matter what happens from here on out, this group is going to be etched in history forward. And that’s pretty special.”

St. Blues forward Vladimir Tarasenko has asked for a trade, per Jeremy Rutherford of The Athletic. There were rumors that he was being shopped, but this is still a stunning turn of events.

According to the report, the reason for Tarasenko’s request stems from the handling of his shoulder injuries and subsequent surgeries. He has a 10 team trade list, but could be open to other possibilities to facilitate a move. Full story at The Daily Goal Horn.

Owen Power, the 18-year-old projected as the No. 1 pick in the 2021 NHL Draft, is set to meet Thursday with the Buffalo Sabres.

The Sabres have the top pick, and the Michigan defenseman has caught their eye. Still, Power said Tuesday he is strongly considering whether he would sign a contract immediately after the July 23-24 draft.

“I wouldn’t say I’m committed to going back to school. I’m leaning towards it right now, but that’s obviously something I’ll have to talk to with whichever team drafts me,” he said. “I’ll be looking into it more after I get drafted.”

The New York Rangers offseason is going to kick into another gear now that the Tampa Bay Lightning closed out the season. Chris Drury checked off one big item from his to do list when he hired Gerard Gallant. Next up will be hiring assistant coaches, finalizing the expansion draft protected list, and then what to do with pick 15 in the draft. 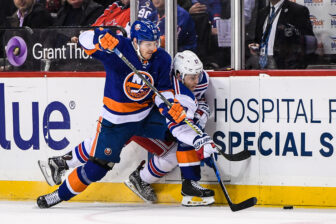