NHL needs to address testing, scheduling, and what if playoff scenarios coming out of COVID pause

A spike in COVID cases has sent the number of players placed on protocol well over 150, and the number of games postponed exceeding 50 this season. Yesterday, the NHL was moved to shutdown the entire league for the holiday break despite implementing enhanced protocols the week prior.

Maybe those protocols were a tad bit too late in preventing this small pause, or maybe there really was nothing the league could to do stop this from happening. They certainly prepared with 99% of the league vaccinated, but as we can see in all facets of life the number of cases are on the rise.

Aside from playing the entire season in a bubble, which no one wanted, this was inevitable.

NHL will opt-out of the Olympics

Recently, commissioner Gary Bettman addressed Olympic participation. “We (NHL) made a promise to the players to participate in the Olympics,” he said at the Board of Governors meetings. “If the players want to go, subject to if our own season is in trouble because of COVID, not to go would be a joint decision with the Players’ Association.”

Now that the league was forced to postpone so many games, they’ll soon formally announce their opt-out of the Olympics.

“Sources confirm the February break in the NHL schedule, originally for the Olympics, will now be used to play make up games for all games taken off the board,” Andy Strickland reported yesterday.

Before this season began, NHL schedule makers created two versions of the schedule, one that included a break for the Olympics and another that did not. With the two-week pause in February now off the table, the league will revise what they have to complete a full 82 game season.

Still, that assumes all arenas will be available to fit these missed games in. It also makes a larger assumption that there’ll be no further disruptions due to COVID.

What other measure will the NHL be forced to look into?

Last season, the league reduced its schedule to 56 games and realigned to limit travel. Specifically creating an all-Canada division to eliminate cross-border travel. Before the league-wide pause, the NHL postponed all cross-border games due to quarantine concerns.

While there is no talk of realignment yet, the border issues are still going to be something to contend with come December 26, when this pause ends.

Enhanced protocols are in place until January 7 and they include daily testing. In addition, masks must be worn at all times by players and members of the team’s traveling party in club facilities and while on the road, and personnel must maintain physical distance while eating. Other rules include prohibiting team personnel from eating or drinking in indoor restaurants or bars open to the public.

The NHL is likely to extend this well beyond that date, but Red Wings’ GM Steve Yzerman recently raised a question about testing that seems to have a modicum of support.

“At the end of the day, our players are testing positive with very little symptoms, if any symptoms at all,” Yzerman said Saturday. “I don’t see it as a threat to their health at this point. So I think we need to take it a step further and question why are we even testing guys that have no symptoms?”

Recently, the NFL eliminated weekly Covid-19 testing for vaccinated players who are asymptomatic. That may be an option, but would the stricter health officials of the Canadian government bodies go for it? Which brings us back to border travel and a possibility of realignment.

Another item in rescheduling could see a return to last year’s series type play. Teams may find themselves playing the same opponent twice or more in a row to reduce travel.

Whatever route the NHL decides to take coming out of this pause, the reality of completing a full 82 game schedule is an uncertainty. Each team playing the same number of games may be impossible.

The league will hope avoid some of the controversy caused in the 2019-2020 return-to-play format, but that will be difficult. Although, deciding the playoffs on Points% rather than Points themselves would appear to be the most likely option.

That would certainly upset several teams on the fringe. For example, if the season were to end today the top 16 teams based on Points% would see the Boston Bruins with 30 points make it in over 5 other teams with more points than them.

Ultimately, there are no easy answers but the reality of COVID isn’t going away soon. Multiple contingency plans are needed and the NHL still has a lot of work ahead. 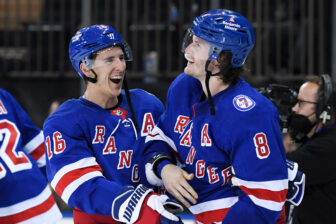 This article originally appeared at The Daily Goal Horn.