The NHL season will begin on October 12 with many rookie camps opening in the next few weeks. As puck drop draws near, here’s some of the latest news around the league.

NHL Roundup: Claude Giroux and Flyers to talk at end of season

The Flyers’ Claude Giroux is likely heading to unrestricted free agency next season. According to GM Chuck Fletcher the two sides will not discuss a new deal until the end of the season.

“I think we’re both comfortable with that,” he said. “Claude’s our captain, he’s a great player, and I anticipate that we’ll find a way to continue that relationship going forward, but right now I think what we’ll do is we’ll just get through the season and we’ll look at the situation and see where he’s at, see where we’re at, and we’ll do what’s best for everybody.”

Elliotte Friedman is reporting that Jack Eichel has changed his representation from Peter Fish and Peter Donatelli to Pat Brisson.

Eichel’s move to one of the game’s most powerful sports agents is a clear indication of just how frustrated he is with his current situation. Brisson represents 52 NHL players including top names like John Tavares, Patrick Kane, Sidney Crosby, Jonathan Toews, and Claude Giroux. Per Puckpedia, the total value of all his contracts are worth $1,044,859,004.

Yesterday, I spoke with a former team executive who said this was the move Eichel needed to make. Calling Brisson a “true professional” and just exactly what this situation needs.

For now, we will have to sit tight and see if this moves the needle in a positive direction for Eichel. Although this change was made for the sole purpose of applying the heat to the Sabres into making a trade. 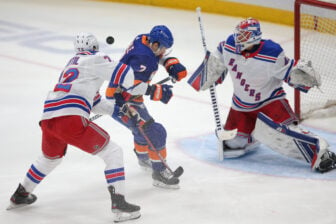 Also Read:
Top three New York Rangers most likely to be traded before the season starts

John Tavares says he’s “doing great” and appears to be on track for the start of the season. The 30 year-old Leafs center was injured in a freak accident in game 1 of the opening round of the playoffs against the Habs. That was when he lost his balance and collided with Corey Perry. It was a knee to head blow that took Tavares out for the remainder of the playoffs with multiple injuries, including a concussion.

“It’s been a great offseason for myself, obviously from a health standpoint, but even more so I think just continuing to get back to work and try to get better and recover well, obviously I think some time really helps,” Tavares said on NHL Network. “I’m really fortunate that it wasn’t anything much more than the incident and I really kind of came out of the hospital and I’ve been doing really well ever since and didn’t really have any hiccups or any issues, just kind of kept building from there.

In Montreal, goalie Carey Price appears to be on track for a return to camp after knee surgery.

“He just arrived in Montreal not too long ago,” coach Dominique Ducharme said Thursday, speaking at his charity golf tournament in Saint-Charles Borromee, Quebec. “I’ll have more news next week, and he should be there for the start of camp, and if not at the start, very soon after that.”

Price, 34, had knee surgery on July 23 in New York, following the Canadiens’ run to the Stanley Cup Final. 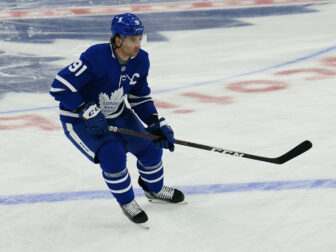 Are the Ducks ready to make some moves? Read more.