Fanfare begins for the NHL’s 32nd franchise as the Seattle Kraken select their expansion-year roster today. They will have some star power to announce the picks including Seahawks legend Marshawn Lynch.

The TV-friendly expansion draft is scheduled to begin at 8 p.m. ET on ESPN2 and SPORTSNET.

The Montreal Canadiens decided to take a gamble and protect affordable backup Jake Allen and expose Carey Price. Will it pay off?

Price is 33 years-old and has 5 years remaining on a deal with a hefty $10.5 million cap hit. Furthermore, if the Kraken opt to take Price, they will have to pay him an $11 million signing bonus with the way his contract is structured. It is also reported he is dealing injuries that may require surgery.

According to multiple reports Seattle is seriously considering taking Price and making him their version of Marc-Andre Fleury. This interest which has found its way out of Ron Francis’ circle of trust and cone of silence could be just a tactic.

Some think Seattle just wants Montreal to give up an asset in order to not select him. Others believe that Francis may not be buying the knee and hip injuries to dissuade him from selecting Price. The intrigue here is fantastic and really presents a great mystery heading into today.

Reports indicate that Minnesota Wild forward Kirill Kaprizov has a legit offer from a KHL team. Pierre LeBrun says that CSKA Moscow is the team trying to lure the Calder Trophy winner back home. He also admits he isn’t sure where any of this will go.

Pierre LeBrun is now confirming that the offer from CSKA is indeed a big one. This could be more than just a leverage play by the 24 year-old offensive star if he doesn’t get what he wants.

At this point, Kirill is only interested in a two year deal that will take him to UFA status at 27. Kaprizov fully believes he’s a 10 million plus type player. The Wild are trying to lock him up for a full 8 years, a deal he’s already rejected.

If Kaprizov bolts for the KHL, I can totally see GM Bill Guerin taking that allocated money and going all in on Jack Eichel. 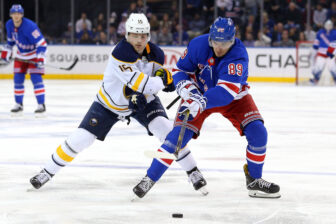 Defenseman Yannick Weber announced his retirement Tuesday from the NHL after 13 seasons.

The 32-year-old will continue playing in his native Switzerland, where he signed a three-year contract with ZSC Lions of the National League on June 8.

Weber, who reached the 2017 Stanley Cup Final with the Nashville Predators, made his announcement in a letter to the Stanley Cup posted on Instagram.

“Dear Lord Stanley Cup,” he wrote. “Fifteen years ago, I left Switzerland with a dream: to be drafted by an NHL team. With only a handful of Swiss players ever playing in the best league in the world, for me it seemed more of a hope than a possibility to be next in line.”

The Predators lost the championship series to the Pittsburgh Penguins in six games.

“Even though I can’t call myself a champion, you left me with a lifetime of memories and great friendships. Now it’s time to head back home and enjoy time with my family.”

Read the latest rumors before they become obsolete on this crazy day.