The Florida Panthers on Wednesday announced a 3-year contract worth $19.5 million with Sam Reinhart. His AAV comes out to $6.5M against the cap.

Reinhart, 25, was acquired from the Buffalo Sabres on July 24th in exchange for goaltender Devon Levi and a first-round pick in the 2022 NHL Draft.

The pending restricted free agent was coming off a season in which he led the Sabres in goals (25) and points (40). Reinhart’s goal total matched a career high, initially set during the 2017-18 season.

“Sam is a gifted and versatile talent that will play a key role for our team in the coming seasons,” Panthers general manager Bill Zito said in a statement. “One of several players to commit to our organization with a multiyear contract this offseason, we are excited to see how these players come together and continue to build a foundation for success in South Florida.”

In a new Swedish interview with Uffe Bodin for Hockey Sverige, Pettersson candidly gave an update on his contract talks.

“My agent (JP Barry) handles it and informs me with what’s going on,” Pettersson said. “Right now, we’re not in agreement but I’m not worried that we’re not going to solve it eventually.”

The Canucks 22 year-old star center is happy in Vancouver, at least for now.

“I want to stay there, but I also want to play for a team that’s winning and has the chance to go far into the playoffs every year,” Pettersson explained.

“I feel like we’ve got a chance to do that next year. If we have that chance when my next deal expires,” he paused, “I don’t know. I just want to play where there’s a chance of winning.”

This past season, Pettersson struggled with injuries but managed 21 points in 26 games. He is an integral piece to any success the Canucks hope to have.

The Winnipeg Jets will require all fans attending home games at Canada Life Centre this upcoming season to be fully vaccinated against COVID-19.

True North Sports and Entertainment, the owners and operators of the Jets and Canada Life Centre, said in a statement Wednesday that “the majority” of season ticket holders told the group this proof of vaccination is important going forward. True North plans to have the arena filled to capacity for games.

The policy does not apply to players, which is handled by the NHL.

The Jets are believed to be the first NHL team to require attendees be fully vaccinated against COVID-19.

In other news, the Jets came to terms with defenseman Neal Pionk on a 4 year deal worth $23.5M. 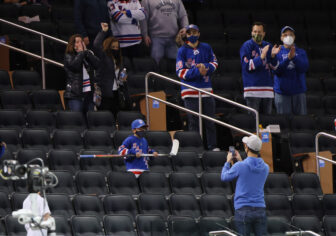 The San Jose Sharks are in a pickle as a new report reveals just how bad some players want Evander Kane gone. Read more.