As expected, restricted free agents around the NHL are avoiding salary arbitration like a vampire hiding from sunlight. 15 of the 17 players that filed have signed new deals including Minnesota’s Kevin Fiala and Nashville’s Juuse Saros.

The Predators inked Juuse Saros to a four year extension worth $20 million.

Saros, 26, started 35 games in goal for the Predators last season, posting a 21-11-1 mark with a 2.28 GAA and .927 save percentage. He had arbitration rights this summer and was potentially in line for a big one year award, but with this extension both sides were able to avoid that uncomfortable situation.

The Minnesota Wild announced the signing of forward Kevin Fiala to a one-year deal worth $5.1 million. Both sides were scheduled to face an arbitrator today, with Fiala’s camp seeking a $6.25M award. The Wild countered with an offer of $4M. As anticipated they met in the middle.

The 24 year-old Fiala had an excellent season for Minnesota. In 50 games, he scored 20 goals and 20 assists for 40 points that included 5 game-winning goals. For his career, he has registered 198 points in 337 games between Nashville and Minnesota. 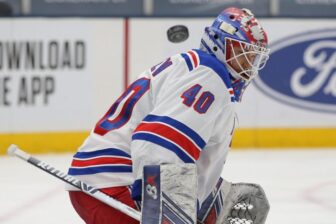 Also Read:
A Rangers trade of Alexandar Georgiev made easier thanks to Keith Kinkaid and need for cap space

Minnesota Wild GM held a Zoom presser to discuss the signing of Kevin Fiala yesterday. Inevitably the question arose about how things were going with his top player and RFA, Kirill Kaprizov.

“I think things are going well enough,” Guerin updated reporters. “We still have time. I’m in constant communication with Kirill’s agent – we continue to move forward.”

When Guerin was asked about the KHL offer and the possibility Kaprizov could bolt for Russia, he seemed unfazed. “It’s not my decision,” he explained. “It doesn’t bother me at all.”

According to Hailey Salvian of The Athletic, Monahan may not be around much longer for the Flames. While Calgary may make a move for Christian Dvorak, they could trade Monahan to address issues on defense.

Monahan has two years remaining on a deal that has a $6.375 AAV and is coming off a down season. He could be a plan B for teams that miss out or move on from Jack Eichel.