The New York Rangers will suit up and hit the ice this month in preparation for opening night on October 11 at Madison Square Garden versus the Tampa Bay Lightning.

To start things off with a bang, NY Post’s Larry Brooks is reporting that defenseman Nils Lundkvist has asked for a trade and the Rangers are trying to accommodate him.

The Rangers are engaged in an accelerated effort to trade Nils Lundkvist after being notified that the 22-year-old Swedish defenseman is unlikely to report to camp in the absence of a deal, The Post has been told by multiple sources.

There really should not be any surprise that the young defenseman, who plays the right side, is looking for a better opportunity to play in the NHL.

At the beginning of August, I wrote specifically about Lundkvist likely being on the outs with the organization after the emergence of Braden Schneider last season.

The Rangers right defense is cemented for the next few seasons with newly named captain Jacob Trouba, Norris Trophy winner Adam Fox, and the aforementioned Schneider. This means that Lundkvist’s best bet is to try and switch to the left side to make the team.

That doesn’t mean there isn’t stiff competition there with Zac Jones and Matthew Robertson vying for a spot to play with Schneider. Both Jones and Robertson’s are lefties which gives them an advantage.

Heading into camp, Jones has a huge opportunity to claim that 6th defensemen spot. The 21 year-old is in the final year of his entry-level deal that comes with a low cap hit of $925,000.

Jones has shown the ability to play in the NHL using his high hockey IQ to compensate for his size at 5-11, 185lbs. This past season, he played in 12 games with the big club tallying two assists and is excited about this camp.

“Zac has been thrilled with his first two pro stints with the organization,” said Jones’ agent Shawn Hunwick. “Zac is already back in New York preparing for the season with a small group of players.”

As for Lundkvist, he actually beat Jones for the 6th d-spot at camp last September. He played 25 games in 2021-22, recording 1 goal and 4 points while partnered with Patrik Nemeth before being sent down to the Wolf Pack.

The former first round pick, 28th overall, in the 2018 Draft is now 22 years-old and struggling to see his NHL dreams come to fruition. Lundkvist still has two years left on his entry-level contract with an AAV of $925,000. That should bode very well regarding what kind of return the Rangers can get for him.

Of course, GM Chris Drury isn’t going to trade him without getting proper compensation. Both Alexandar Georgiev and Vitali Kravtsov made trade requests that dragged on for a full season, so don’t expect any rash moves. 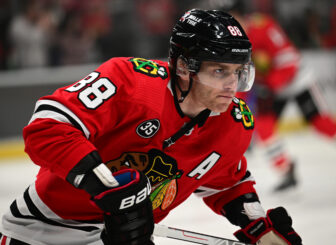