No Quit New York Rangers looking to win another Game 7 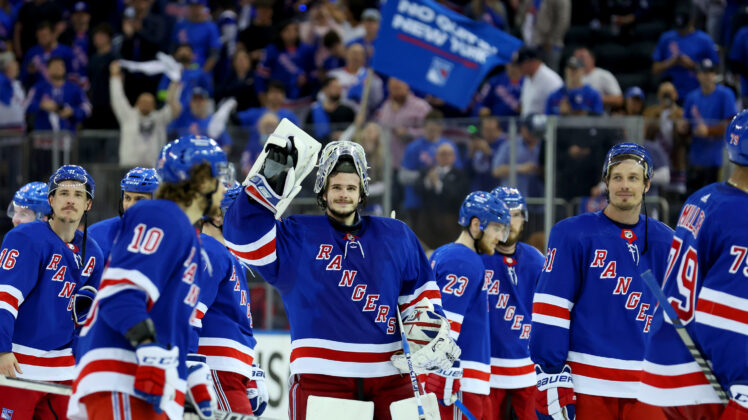 The New York Rangers continue to show a level of resiliency and heart this season that makes one wonder just how far they can go.

After winning their fourth straight game facing elimination in these playoffs, the Rangers are just another win away from the Eastern Conference Final. Of course, it will take beating the Carolina Hurricanes at PNC Arena. A place they’ve yet to lose this postseason going 7-0 to date.

“It didn’t surprise me,” Gerard Gallant said after Game 6. “I knew we’d come out hard and play well. It was a competitive game. We jumped on them early, got a couple-goal lead, so that was key.”

The New York Rangers were the second best team in the NHL during the regular season with 27 come-from-behind victories. They’ve added to that in the Stanley Cup playoffs in a big way. Of their 7 wins in this postseason, 3 of them were comeback wins in Games 5, 6, and 7 against the Pittsburgh Penguins down 3-1 in the series.

Now, the Rangers will play another Game 7 but this one will be on the road against a Hurricanes team that has outscored their opponents 25-8 at PNC Arena. They’ve also outscored the Rangers 7-2 in the three homes games played there in this series.

“The three games in Carolina were different type of games than the three games in New York. Why? I don’t know,” Gallant tried to explain. “We open it up, get more scoring chances, but we also give up more. I ask them to play the same way every night.”

The Rangers have outscored the Hurricanes at the Garden by a 12-4 margin, and hold the scoring edge in this series 14-11.

So can they come up with one road win in this series?

Igor Shesterkin needs to steal one

The New York Rangers will be looking for Igor Shesterkin to steal them a road game in this series.

Simply put, the team’s top scorers are just not reliable enough in Carolina from game to game to be counted on. The team is going to have to be solid defensively and let Shesterkin win them Game 7.

“We have to play a very disciplined game,” Panarin explained. “We have to play our best offense and best defense, but if we had just one key, we probably would’ve won by now.”

Shesterkin was stellar against the Penguins in their first round series making 99 saves on 108 shots to go 3-0 in Games 5, 6, and 7. He posted a 2.93 GAA and a .914 SV%. against them but has been much better versus the Hurricanes.

“I honestly just try to do my job and stay within the game,” Shesterkin said.

In the end, the Rangers will have to pull together on the road in order to advance.

Waiting for either team are the two-time defending Stanley Cup Champions, the Tampa Bay Lightning. The winner of Game 7 will host them on Wednesday for the right to play for the Stanley Cup.

Get the latest on all the Calgary Flames free agents, plus what kind of contract is Andrew Copp looking for from the New York Rangers. Plus what’s up with Barry Trotz. Read more.