The New York Rangers announced that Brennan Othmann was the organization’s Prospect of the Month for October.

The 19 year-old also earned OHL Player of the Month honors for October by scoring 10 goals and a total of 23 points in just 13 contests.

Let’s take an quick look at the current rankings for the top future Blueshirts.

Below are my top 10 prospect rankings for the New York Rangers organization.

In order to be considered for this list, the player must be 23 or younger and have played 10 games or less at the NHL level.

Brennan Othmann: After scoring 50 goals and 97 points for the Flint Firebirds in 2021-22, Othmann is off to an even better start this season with 13 goals and 23 points in 13 games. The Rangers would’ve loved to have Othmann stick around and develop with the Hartford Wolf Pack, but an old agreement with the CHL prohibits players under 20 from playing in the AHL. Another thing of note is Othmann’s is ratcheting up the physical play and already has 25 penalty minutes on the year.

Will Cuylle: The big strong winger has recorded 2 goals and 4 points in 6 games with the Wolf Pack to start the season. He’s getting top minutes and that exactly what the Rangers want to see from the power forward. Last season with the OHL’s Windsor Spitfires, he notched 43 goals and 80 points in 59 games. There’s a good chance that he could earn a call up this season.

Matthew Robertson: He remains the organization’s most NHL ready prospect defenseman. At 6-4 and 201 lbs, he has the size to play in the league and the Rangers may need him at left defense soon as Ryan Lindgren just went down with an injury. This season he has 4 assists in 2 games with the Pack after scoring 11 points in 65 games in 2021-22.

Adam Sykora: One of the youngest prospects in the Rangers’ system, the Blueshirts made him their first pick of the 2022 Draft after he recorded 10 goals and 17 points in 46 games with Nitra. What the team loved about him was his aggressive forechecking style with an ability to put the puck in the net. He has 5 points (1G – 4A) in 10 games for Nitra this season.

Dylan Garand: The Rangers are liking what they have in Garand. In his his first pro season with the Wolf Pack, he’s 1-2-0 with a GAA of 2.68 and .911 SV%. Those numbers are even more impressive when you consider the struggles the Pack have had defensively to start the year. Before heading to the AHL, Garand won Gold at the WJC for Canada with a 6-0 record, 1.98 GAA, and .925 SV%.

Bryce McConnell-Barker: Named the Soo Greyhounds captain to start the season and the big two-way center is delivering. This season, he’s amassed 13 points in 13 games with 5 points on the power play and a shorthanded goal. Last season, McConnell-Barker picked up 23 goals and 49 points in 68 games.

Bobby Trivigno: The Rangers went after the undrafted star from UMASS and signed him last March after he scored 48 points in 36 games in his final NCAA campaign. Last year’s College Hockey News’ player of the year struggled at Wolf Pack camp this September but finally got into the lineup recently and made an impact. This season he has 2 points in three games.

Ryder Korczak: He’s an offensive minded player that registered 79 points in 68 games for the Moose Jaw Warriors of the WHL in 2021-22. The Rangers prospects at center are limited but his ceiling is still high despite no points in 3 game with the Pack so far this season.

Brett Berard: Entering his junior year at Providence College after registering 38 points in 36 games last season, he’s off to a decent start with 4 assists in 7 games.. The Blueshirts have yet to sign him to an entry-level contract but believe he has the talent to play a bottom-six role at the NHL level. 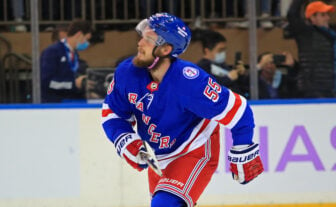