NY Rangers over reliance on goalies a concerning issue

Regardless of poor goaltending by Alexandar Georgiev or “stolen wins” by Igor Shesterkin, the NY Rangers have to play better defense as they enter the final portion of the schedule.

The Rangers are a tale of two teams depending on who is standing between the pipes on any given night.

Goaltender Igor Shesterkin is the undisputed number one goalie with a record of 28-6-3. He has had multiple stolen victories this season. His counterpart has not been as successful or lucky which has led to a lack of confidence in himself and for the team in front of him.

With Tuesday’s loss to the Minnesota Wild, Georgiev has lost five straight starts. His last win came on Jan. 8. He hasn’t done his job as Shesterkin’s backup, yet he can’t take the blame entirely for his disappointing 7-9-2 record. The team defense has become a liability.

Stolen wins is a term used in hockey to define a team win in which a team should have lost if not for the play of that their goalie. MSG Networks analyst Steve Valiquette often refers to this term when explaining how well a Rangers goalie did or in some cases the opposition netminder.

He evaluates games by three different levels of scoring chances. A high percentage (grade A), mid percentage, and low percentage shots on goal. He factors in how many of each grade a team gets, calculations of expected goals to be scored and of course the final score. An analytical game report, but one that is simple and clear to break down the a contest.

Here is where things get dicey. There will be times when the team’s defense beaks down and depending on who is in goal, an incredible save is made or a goal is scored against that makes the goalie look bad. Where does the fault lie?

So many times this season we have read that Shesterkin “stood on his head” to keep the Rangers in a game. The flip side to that is something to the extent of “Georgiev let two goals in early and the Rangers lose.”

Yet if you break down the above statements one thing is quite clear: The Rangers are giving up too many grade “A” quality chances especially in the early parts of a game. 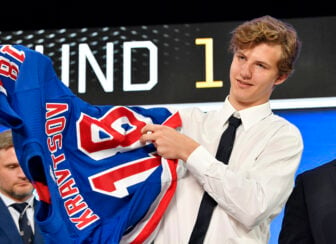 Two on ones, three on twos, breakaways and cross-slot passing plays are creating excellent scoring opportunities against. Shesterkin has played much better than Georgiev this season, but maybe if the team was able to keep the Grade A chances to a lower rate, the latter might have a better record as would the team overall.

Fundamental mistakes defensively has cost the team points and wins. Defense is a five man thing, not just the guys on the blue-line, But more times than not, the defensemen are the ones caught out of position, losing their man in coverage, or being forced into a bad pass.

All three tend to lead to shots on goal, where Shesterkin has been able to stop the puck and Georgiev hasn’t.

This Blueshirts’ team needs to tighten up on their end of the ice. The defense needs to win the one on one battles in the corners and find ways to chip the puck up the boards to a forward without turnovers.

The forwards have to be faster to the puck on the side boards and smarter about exiting their own zone which turns into more shots against them.

Goalies are always relied upon to make the big save, but sometimes the big save or goal against is a result of a failed team dynamic. The players in front of the goalie need to stand on their heads too in order to get a win. 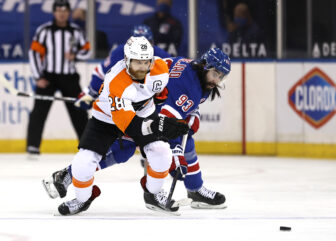