NY Rangers singular focus is to force Game 7 against Lightning 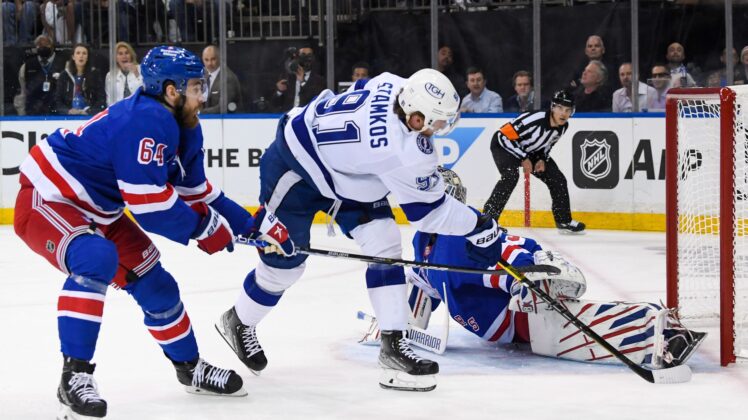 Everything the NY Rangers do from this moment on after a disappointing Game 5 loss to the Tampa Bay Lightning is to force another Game 7.

The deck is most definitely stacked against them.

Three straight losses after being up 2-0 in the Eastern Conference Final hurts. Two late goals in Games 3 and 5 are devastating. An inability to break through the Lightning defense is frustrating and not clearing the crease in front of Igor Shesterkin is infuriating.

All that aside, the Rangers need to rise to the occasion and do what they’ve done two rounds before.

Stave off elimination and win a series.

NY Rangers must force another Game 7

The Rangers will board a plane and head to Amalie Arena in Tampa, a place they’ve not won in two tries this series.

“It’s tough tonight,” New York coach Gerard Gallant said. “It’s a tough night, there’s no doubt. But tomorrow we’ll get on the airplane and we’ll be ready to go play a game in Tampa Bay. It’ll be a battle. They’re a good hockey team. That’s why they’re the Stanley Cup champs. We’re going to have to go in there and play our best game and win a game to give ourselves a chance for Game 7 back here.”

Getting it back to Madison Square Garden will not be easy.

In these playoffs, the Rangers are just 2-7 on the road. However, both those wins came when they were facing elimination.

First it was Game 6 in Pittsburgh against the Penguins, where they found themselves in a 2-0 hole early but roared back for a 5-3 victory. They won that series down 3-1.

That was followed by a 6-2 trouncing in Game 7 of the Carolina Hurricanes on the road. The Blueshirts overcame a 2-0 series deficit and the a 3-2 before advancing past the second round.

That’s 5-0 in elimination games this postseason. It’s something they need to not only hang their hat on but use it to propel them to a Game 6 win in Tampa on Saturday.

“We’ve been in this situation before and it seems like we play our best hockey when our backs are against the wall,” Ryan Lindgren said. “We’ve just got to go to Tampa and win a game. Take it one game at a time. Draw from those past experiences and go play our best hockey.”

One thing is clear, they won’t be catching the Lightning by surprise after what they did to the Pens and Canes.

“We expect their best game of the playoffs, but we expect ourselves to be at that level too,” Bolts defenseman Victor Hedman said. “We’ve been successful when we’ve had the opportunity to eliminate teams, and now we have the chance again going back home. But we’re not going to hang our hat that we’re going home. We’ve got to execute like we have in previous games.”

The Rangers best needs to be much better than they’ve shown in these playoffs if they want to knock off the two-time defending champs. 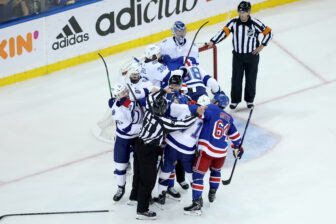