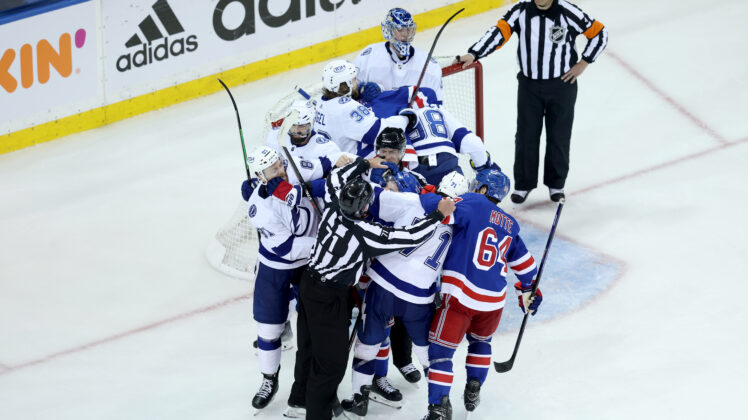 The New York Rangers lost to the Tampa Bay Lightning in Game 5 and face elimination for the third consecutive series.

An inability to score at even strength, difficulty clearing the crease, and too many turnovers that lead to offensive chances against are why they are in this position. However, the referees decision to swallow the whistle in the third period in order to not influence the outcome of a tie game likely had the opposite effect.

“I did. I really did, yeah,” Gerard Gallant responded to a question about a lack of penalty calls. “But in saying that, I thought they did an excellent game. They let the teams play, but I thought we could have had a couple more. There’s no doubt.”

In fairness, the penalties were not lopsided with a 2 to 1 difference in favor of the Lightning.

Unfortunately for the Rangers, there were several obvious calls in the game that would have put their potent power play on the ice to work. For example, early in the first period Jacob Trouba was blatantly tripped with no call. Plus, on the first Tampa goal, Nick Paul slightly interfered with Barclay Goodrow’s ability to get to the point to block Mikhail Sergachev’s shot.

The most egregious was when Jan Rutta put his arms around Kaapo Kakko’s neck and head in a tie game during the third period. It was a play in the offensive zone that slowed Kakko from getting to a loose puck and eventually allowed the Lightning to clear it thus ending the threat.

There was also an awful call on K’Andre Miller earlier in the game, where he was called for hook. Although replays showed it was a great defensive play from behind that took away a scoring chance.

“I didn’t think it was a penalty when it happened,” Gallant said.

New York’s only power play came thanks to a great pass by Igor Shesterkin during a bad line change that forced the refs to call a Too Many Men infraction.

“The one penalty we kinda forced the call, cause there were six guys playing– they were forced to call that one,” Andrew Copp noted. “Maybe there’s a couple others that were borderline that maybe we deserved, but it wasn’t like they had seven power plays and we had one. Maybe, but you can’t rely on that.”

New York is rightfully not blaming referees for the loss. They were not the reason Ryan Strome whiffed on a wide-open net late in the game after a beautiful feed from Copp.

Although consistency from the officials would likely be appreciated by the Rangers. A penalty in the first or second period should still be one in the third period regardless of the score.

Game 6 is Saturday night in Amalie Arena at 8 PM ET. 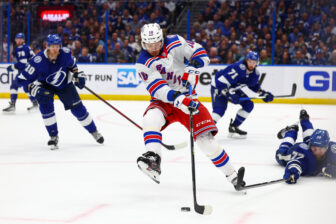