Catch up on all the latest NYR Prospect news here at Forever Blueshirts.

New York Rangers 2020 7th Round Pick Hugo Ollas of the Merrimack College Warriors was named the Hockey East @StopItGoalies Goaltender of the Month for November.

Ollas had a shutout streak of 144:00 before his most recent game (a 3-1 loss against UConn), posting back-to-back shutouts against Maine Black Bears on November 11th and Sacred Heart Pioneers on November 17th, earning “Goaltender of the Week’ honors on the 21st.

Merrimack College Warriors have moved up to 10th in the USA TODAY – USA HOCKEY MAGAZINE Men’s College Hockey Poll, while climbing to 11th in the USCHO Division I Men’s Ice Hockey Poll. The team is currently tied for first in Hockey East Men’s Standings, with a conference record of 9-2-1-1 for 27 points (13-4-0 overall record).

Staying in Hockey East, 2020 New York Rangers 5th Round pick Brett Berard of Providence College was named the Prospect of the Month for November by the organization.

Noah Laba, a 2022 4th Round selection by the New York Rangers, was invited to the U.S. National Junior Team camp roster for USA Hockey ahead of the 2023 IIHF U-20 World Juniors Championships.

The freshman for Colorado College has made a strong transition to college hockey, accumulating 7 goals and 11 points in 17 games. Laba will be joined at camp by fellow Colorado College Tigers teammate, goaltender Kaiden Mberko. Mberko was a member of Team USA at the 2022 International Ice Hockey Federation World Junior Championships, having posted a record of three wins and one loss in four games with a 1.76 goals against average, and .921 save percentage.

The Colorado College Tigers Men’s Ice Hockey team currently sit third in the NCHC with a conference record of 5-4-1. Their overall record is 8-9-1.

Another New York Rangers prospect, 2021 1st Round Selection Brennan Othmann earned an invitation to Hockey Canada’s National Junior Team selection camp in Moncton. The 19-year-old from Scarborough, Ontario is one of 10 possible returning players who won a gold medal at the rescheduled 2022 World Juniors in Edmonton over the summer. Othmann will hope to play for more gold on his birthday, January 5th.

The 2023 International Ice Hockey Federation World Junior Ice Hockey Championships are scheduled to be held from December 26, 2022 (Boxing Day) through January 5, 2023 in Halifax, Nova Scotia and Moncton, New Brunswick, Canada.  Canada takes on Czechia at the Scotiabank Centre in Halifax in one of four games on the opening day of the tournament.

Othmann currently has 13 goals and 35 points in 26 games this OHL season split between the Flint Firebirds and Peterborough Petes. 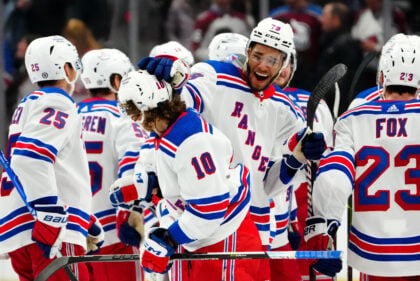