The Rangers have won six in a row and will look to make it seven as they battle the Chicago Blackhawks tonight at the United Center.

The struggling Chicago Blackhawks are 8-8-2, and below .500. On Sunday, they lost to the New Jersey Devils who scored five consecutive goals in the first and second period for the 7-5 win. Against the Devils, Blackhawks’ goaltender Corey Crawford was relieved by Anton Forsberg at the start of the third period. Crawford allowed six goals in regulation for just the second time during his entire 396 game career. However, Crawford has played well for the majority of this season and his numbers support that claim. In fifteen games played this season he has two shutouts, a 9.32 SV% and a 2.21 GAA.

Be prepared to stop shots: The Blackhawks numbers might not look as good as they have in the past, but they know how to shoot the puck. The Blackhawks are sixth in the NHL in shots per game with an average of 34.1 shots per game. Henrik Lundqvist should be set to start and will have to be on top of his game as he will be busy.

Watch the rebound: No… not the one coming off Hank’s pad, he’s been as absorbent as Charmin Ultra lately with his rebound control, showing signs that his game is coming around. Watch the Blackhawks rebound. Chicago, like the Rangers, has gotten off to an “average” start. They’re adjusting to losing a major scoring threat in Artemi Panerin, and have infused their lineup with a large amount of youth and relative inexperience.

However, BEWARE. Along with the Rangers, Chicago has been one of the best teams in the NHL over the past seven years, despite being up and down this year. They shellacked Pittsburgh and Columbus early on, 10-1 and 5-1 respectively, but have dropped some games to teams like Colorado and Boston. They responded to both losses with wins and coming into New York after, what they would consider unacceptable, losing 7-5 to the New Jersey Devils, expect Quenneville to tighten up the defense and attempt to stimy the Rangers offensive attack by clogging up the neutral zone. Chicago is a mature team at its core and they should come out with a strong showing against the Rangers.

Get to Crawford: Against the Devils, Crawford allowed six goals on twenty-five shots in a performance that even he was surprised by. “It’s tough, too. We played so well and scored a lot and (I) just couldn’t find a way to make a save,” Crawford recapitulated after Sunday’s game. Crawford’s confidence was obviously diminished after Sunday’s game and the Rangers should try to get shots to him before he can get comfortable.

JT Miller: Initially the pick was Pavel Buchnevich, and odds are he may score as he’s been on quite the hot streak lately. However, we picked Buchy-man as our player to watch (and score) versus Boston and he came through for us with a beautiful goal displaying his talent. We then picked Rick Nash and Nick Holden against the Edmonton Oilers. Both rewarded our trust as Nash netted two goals and Holden played a dependable and solid game, seeing many shifts against Connor McDavid and rising to the occasion.

It ain’t easy being right so many times so take this pick with a grain of salt, odds are we’re due for a miss. But based on his overall play the past few games, I have the gut feeling that JT Miller is due to light the lamp. I may be pushing my luck here, but I’ll even call it in the second period at even strength. My only question is if this happens, do we get a free pie from Papa John’s?

Alex Debrincat and Nick Schmaltz: The nineteen-year-old Debrincat was drafted 39th overall in 2016 and has eleven points through eighteen games this season. And with four points in his last two games, the rookie is heating up. 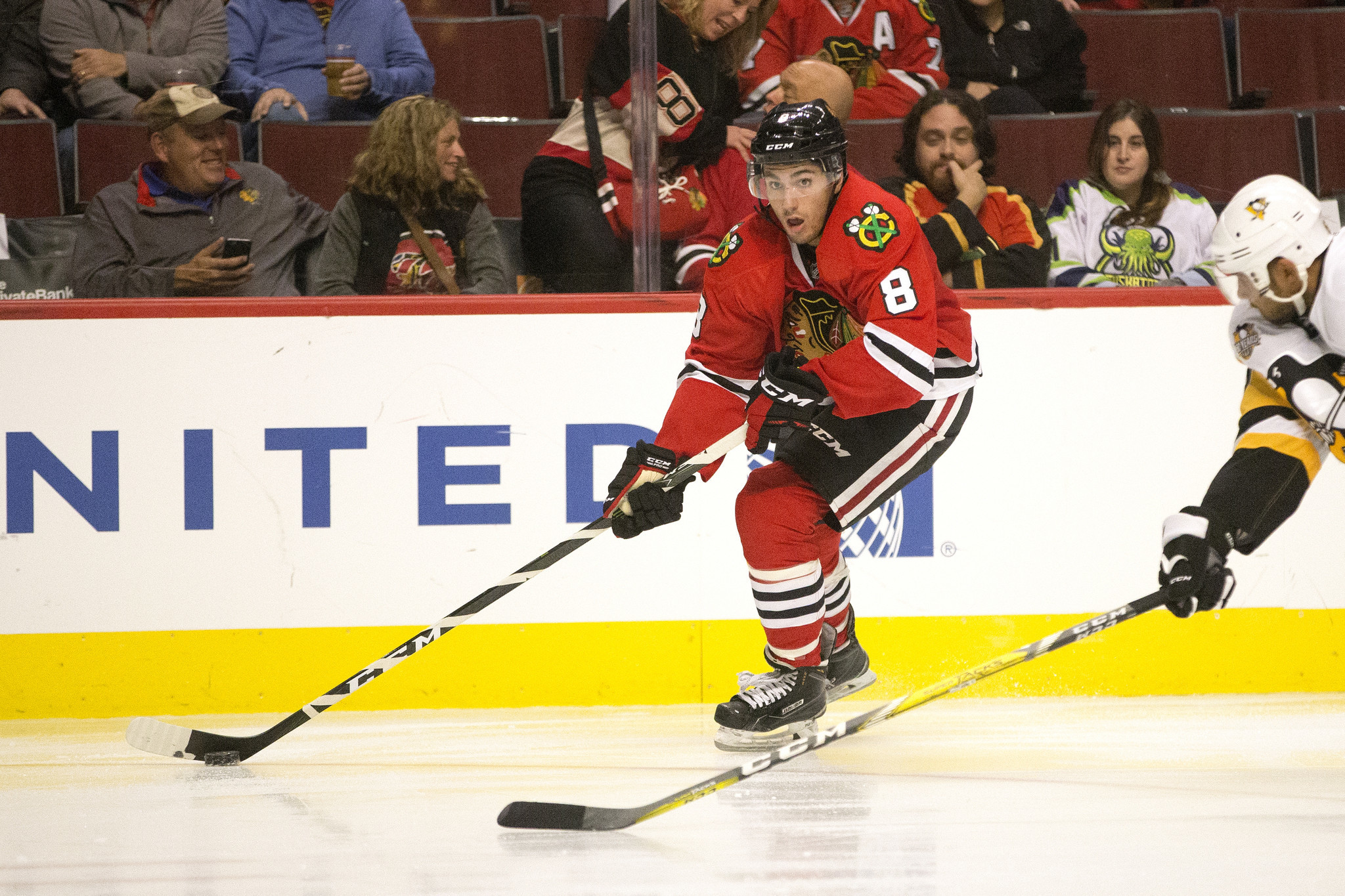 Nick Schmaltz, who we mentioned in our pre-game podcast, has been seeing some shifts with Patrick Kane. After missing time earlier in the season, the 21-year-old is putting together some under the radar numbers (3 goals, 4 assists in 14 GP) but the skill is there, and he’s not afraid to go to the net. If I’m picking outside the obvious (Toews and Kane), another player I’m looking at is Nick Schmaltz, who showed signs of warming up versus New Jersey posting two assists.

Rangers defenseman Brendan Smith appears to be scratched once again. If true, Smith will be a healthy scratch for the seventh straight game. For more on this mystery, click here.

AV confirms no changes on D and @HLundqvist30 will start for #NYR against the Blackhawks Wednesday night.