Patrick Kane is in town to face the New York Rangers amid trade rumor buzz. However, as a team and an organization, the Blueshirts have a more pressing matter of business to attend to tonight: Getting two points.

After blowing their third straight game with a lead on home ice, this time to the Ottawa Senators, they face the Chicago Blackhawks. A team that hasn’t won a game since November 12 (0-7-1).

Patrick Kane is the most anticipated trade deadline rental in recent memory and he’s been connected to the New York Rangers since last season.

The 34 year-old will be an unrestricted free agent this summer and the Chicago Blackhawks are in full rebuild mode. There’s been some speculation that Kane would be interested in sticking around and help shepherd the transition. However, Elliotte Friedman is not hearing that to be the case.

“There were rumors he might prefer to play out the season in Chicago and decide his future in free agency, but several sources threw cold water on that idea,” Friedman said this week. “As you can imagine, there’s been no extension talk in either case.”

Kane currently leads the team with 17 points (3G – 14A) in 22 games this season and his name is attached to the Rangers, Colorado Avalanche, Edmonton Oilers, and Boston Bruins with more to follow as we get closer to the NHL Trade Deadline on March 3.

According to DFO’s Frank Seravalli, he believes the cost to land Kane will be very similar to what the Panthers gave the Flyers for Claude Giroux at 50% cap retention.

Both Giroux and Kane are represented by super agent Pat Brisson, who noted himself that the situations are very similar. In the end, Giroux picked his landing spot thanks to a full no-move clause.

Where will Kane want to go and if it’s the Rangers will they even be in a position to make the move?

The Rangers will need to start winning and moving up the standing or this could be a moot point by January.

How will Rangers’ fans react to Kane

Back in 2012, trade rumors were running rampant in New York that the Rangers were hot and heavy in trying to acquire Rick Nash.

In February of that season, Nash and the Blue Jackets visited the Garden with fans chanting “We Don’t Want You”. It was a surreal scene with the Blue Jackets captain tying it late only to see the Rangers win it in OT.

That July, Glen Sather sent a first-round pick, forwards Brandon Dubinsky and Artem Anisimov, along with defenseman Tim Erixon to Columbus for Nash, who became a Rangers’ fan favorite for the next five and half seasons.

So how will fans react to Kane’s visit? What will the Garden Faithful chant?

Something tells me it won’t be, “We Don’t Want You!” 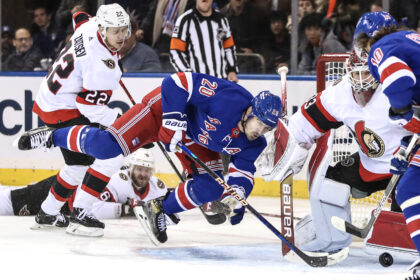 Also Read:
Rangers ‘not close to good enough’ in OT loss to Sens