The New York Rangers continue to work on their offseason checklist, and Gerard Gallant’s coaching staff is a priority. Chris Drury and his new head coach are actively talking with candidates which they want to get done soon.

“There’s no decision yet made on staff,” Gallant said at his press conference. “We’re talking to a lot of people, like you said Mike Kelly has been around a long time with my staff, we’ll see where that goes but there’s nothing done with anybody yet. We’re just talking to guys.”

The expectation is that the Rangers will have assistants in place before the NHL draft.

According to The Athletic’s Rick Carpiniello, he believes the Rangers are looking to bring back Dan Girardi as an assistant coach.

The possibility of bringing back one of the Rangers best defensemen as an assistant coach is a brilliant idea. One of the toughest defenders in the NHL with a keen ability to block shots, he would be a great addition to the group.

This past season, the 37 year-old joined the Sabres as an assistant and helped interim head coach Don Granato turn things around. “I’ve kind of been through everything,” Girardi said on WGR550. “The way I played, how I carried myself in the [locker] room, a teammate first, didn’t worry about all my individual stuff, really thought about the team game; all those things, when you’re a good teammate, word gets around and you’re able to talk to guys.”

“Obviously I’m the assistant coach now, an interim assistant coach, but I’m talking to guys now like I’m just out there with them at practice and talking about random things, chirp here and there,” Girardi continued. “But just get a good feeling between all of us and get a better feeling back in the building and in the room, a positive atmosphere. We’re going to have to put the work boots on to get out of this thing with everyone.” 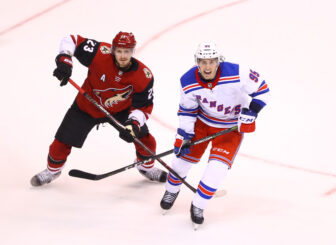 Hold off on the reunion.

The Sabres removed the interim tag from Don Granato and during his press conference he mentioned that both last season’s assistants are in the mix to come back. Matt Ellis and Dan Girardi were integral in helping turn Buffalo around, so it makes sense that they would be at the top of his list to return.

Gerard Gallant is highly likely to bring his right hand man Mike Kelly in as one of his assistants. Andre Tourigny who helped win Gold at the World Championship in Latvia was just hired as the Coyotes new bench boss. If Dan Girardi opts to stay in Buffalo, Gallant could reunite his old Vegas crew in New York.

Ryan McGill worked with Gallant and Kelly with the Golden Knights and seems like a logical candidate. He played for the Blackhawks before getting into the coaching ranks in the OHL and WHL. McGill also has ties to the Blueshirts as the Wolf Pack’s head coach from 2003-2005.

Get fully up to speed with this massive NHL Rumors update here.