The New York Rangers power play hasn’t scored in the past four games. That includes an 0-2 output Sunday night in a 2-1 loss to the Montreal Canadiens. Had it connected at least once, maybe they would’ve gotten a point in the standings.

Yet for all the talent that the first power play unit has with Adam Fox and Artemi Panarin alternating as power play quarterbacks, Vincent Trocheck in the bumper position, Chris Kreider as the man in front, and Mika Zibanejad as the trigger man, they’re on an 0-11 skid.

So why can’t they score?

It’s pretty simple for me, they’re just too predictable. The first power play unit spends a majority of almost the entire two minutes whipping the puck around looking for the slightest opening to set up a Zibanejad one-timer.

Opposition penalty killers are almost willingly ignoring the man in front as they cheat to take away that shot. And what’s really driving everyone crazy is that it appears the players and Gerard Gallant aren’t going to change a single thing.

Last season, the New York Rangers power play finished 4th in the NHL with a 25.2% success rate. This year, the team is running at a 22.1% clip, but with goal scoring up league-wide that ranks middle of the pack at 16. It’s only made worse since the team’s PK hasn’t been as good, currently ranked 13th at 79.8%. To contrast that stat, the Blueshirts were 7th in 2021-22 killing off 82.3% of penalties.

NHL Network Analyst Mike Rupp joined Forever Blueshirts last week to discuss the Rangers. He also referred to the power play as being to predictable and offered this suggestion to change things up.

“You’re phasing in Vinny Trocheck,” Rupp began. “He’s in that middle release, bumper position that takes some adjustment, but he’s been fine. Last year, Chris Kreider was on an absolute heater with 26 goals on the power play which will be tough to match. It’s still a strength of this team, but if I had one thing to nitpick I’d like to see Bread shoot the puck a little bit more.”

This season, Panarin is averaging 12.3 shots per 60 minutes on the power play, which is right around his average. To provide a little contrast, Mika Zibanejad is at 21.4 shots per/60 on the man advantage when he was 17.7 the season prior.

According to stats on the site Hockey-Reference, Adam Fox is shooting a little less as is Chris Kreider. So while Rupp is calling for Panarin to shoot more, maybe the entire first unit needs to think shot first. It would be a change of pace and likely open things up for that lethal Mika one-timer.

“I think if [Panarin] starts to do that more, even if you know you’re shooting through a screen, just blast a few to keep the other team honest,” Rupp emphasized.

“It’s like the run and pass game in football where you have to throw the ball downfield just to keep that other team honest. It’s the same thing on the power play because everyone knows about Mika’s one-timer.”

At the end of the day, Rupp noted that the Rangers power play is still very good and really doesn’t need a drastic overhaul.

“When you picture Panarin on the right side,” Rupp added. “When he’s got that puck there you’ve got a one-timer up top to Fox, in the middle to Trocheck, and far-side to Mika. Those are really nice options to have and all those guys can bring it. Plus you have Kreider when’s he’s healthy for tips.”

“I wouldn’t change [the personnel], except sometimes they feel too predictable. So mix it up. Waste a couple off the goaltender’s head if you’re Artemi Panarin to keep everyone on their toes. I like their unit and when healthy this power play is absolutely deadly.”

You can see the rest of our interview with Mike Rupp on our YouTube Channel here. 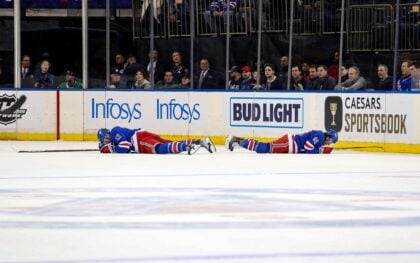