The clock is officially ticking on Gerard Gallant to fix the issues plaguing the New York Rangers this season. It’s been a truly stunning decline for a team picked as a preseason favorite to contend for the Stanley Cup.

After beating the Philadelphia Flyers on November 1 in overtime, the team’s record was a solid 6-3-2. Since that game, the Rangers are 4-7-3 with a string of blown leads and a 1-5-2 record on home ice.

Let’s quickly dismiss any silly notion that in less than a season, Gallant has gone from a Jack Adams finalist to a clueless buffoon.

For his career, the 59 year-old has a coaching record of 333-250-4-62. He led an expansion Vegas Golden Knights team to the Stanley Cup Final in their inaugural season, which is a huge accomplishment. Gallant also took the Rangers to the Eastern Conference Final last year when many weren’t even sure they could make the playoffs.

Giving Gallant his just due is only right, but he’s also the commander of a sinking battleship. He needs to start not only holding himself accountable but some of his star players as well in order to survive these rough seas long enough to fight back.

Clock is ticking on Gerard Gallant

Whether it’s the NHL calendar or the fact that Barry Trotz is sitting out there awaiting for the right opportunity to return, the pressure is all on Gerard Gallant.

The Rangers reached a tipping point in their latest debacle on home ice by losing to the Chicago Blackhawks. A team that was winless in eight straight games.

It all came to a head in the second period when an angry Jacob Trouba delivered his second big open-ice hit leading to his second fight of the night. Since the incident occurred with less than three minutes remaining, he was sent to the locker room. As the Rangers captain skated off he furiously threw his helmet against the boards, stared down his teammates on the bench and yelled: “Wake the f–k up!”

Honestly, there’s nothing more for Trouba to do.

While it was nice to see the Rangers score on the ensuing power play to make it 3-1 heading into the third period, it simply wasn’t enough. Not when Artemi Panarin, who just can’t seem to buy in to playing a simple north-south game, coughed up a puck to Patrick Kane forcing Trouba to hook him. That led to another Hawks PP goal and an embarrassing loss.

According to ESPN’s Emily Kaplan, owner James Dolan is paying very close attention to the Rangers situation and in particular to the head coach. “I believe that he would like for him to show more accountability,” she said.

Gallant’s comments after last night’s loss to the Blackhawks probably aren’t going to cut it with the Rangers fiery owner.

“I thought we played faster but we have to make adjustments,” Gallant said. “I saw more to tonight than I did the other night (against Ottawa), put it that way. It’s a team thing. It can’t be 13,14, players– it has to be 20. We’ll get out of this sooner or later.”

This prompted MSG Analyst and former Rangers goalie Steve Valiquette to push back on the postgame show. In his view, he could not agree with Gallant’s assessment that the team played harder. Especially not after mustering just six shots in a third period when they were down.

When Drury got the job last May, he fired his old friend David Quinn and started the search for an impact hire behind the bench. He had high hopes that either Mike Sullivan or Rod Brind’Amour would leave their Metro Division gigs at the time; neither did, and the Rangers opted for Gallant. If GM and owner are still pining for a headline name as a coach, Barry Trotz is out there, unemployed.

At the time, I dismissed the notion, even when others told me not to. Now here we are, and even more prominent voices are indicating to me privately that Gallant is very much on the hot seat.

So what can Gallant do?

In truth, it wouldn’t be wise to scratch a player like Panarin. I’m not even sure reducing his minutes is the answer. And for the record, Panarin isn’t the only player that deserves a benching. Still, Gallant can at least break up the first power play unit and give his second unit some more time.

Gallant should also stop playing Jimmy Vesey on the top line, who will likely not be here next season. Not when your best right wing option is wallowing on the third line in Kaapo Kakko.

Speaking of the Rangers future, Alexis Lafreniere needs to be given more minutes. There’s no reason why Chris Kreider can’t make the switch to the right side on the either the first or second line.

All that being said, Gallant is not solely responsible as GM Chris Drury constructed the lineup. Unfortunately, with the Rangers salary cap situation and number of no-move clauses they have, there’s no shakeup trade he can make. Plus trading any of the kids, who are cost controlled doesn’t make sense.

That leaves Drury with just one big option.

If Gerard Gallant can’t turn this team around soon, he may have no choice but to make a coaching change. 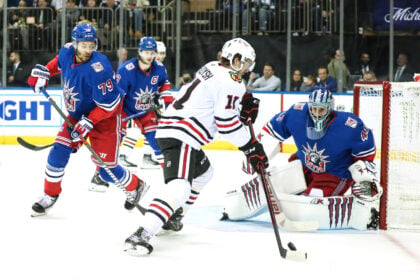