Barely a day after head coach Gerard Gallant labeled Vitali Kravtsov as an extra forward, NY Post’s Larry Brooks is reporting that the two sides are discussing a conditioning stint in the AHL.

According to Brooks, this may happen before the team leaves to play the Senators in Ottawa on Wednesday.

Vitali Kravtsov and his agent Dan Milstein would need to consent after signing a one-year, one-way contract this past summer. If they do, the young forward should play in at least five games for the Hartford Wolf Pack starting Saturday.

Kravtsov, 22, has played in just six games this season with a single assist to his credit. If he indeed does not play today against the New Jersey Devils as expected, it’ll be the eighth consecutive game (six as a healthy scratch).

“It’s always bad not to play, so after these injuries I am trying to prepare my body for games,” Kravtsov told The Post following Sunday’s practice. “Maybe I am still not in the best condition to play, I don’t know.”

This has been a rough campaign for the former first-round pick in the 2018 draft. He’s worked hard to establish a spot in the lineup but a few injuries and a tooth infection have derailed him.

Julien Gauthier, who was called up to help a shorthanded Rangers roster has played great and locked a spot on the fourth line. That’s prevented Gallant from putting either Barclay Goodrow or Jimmy Vesey there and in turn has kept Kravtsov out.

“I like the kid, (but) right now, he’s our extra forward,” Gallant said as relayed by Vince Mercogliano. “I’m happy with the lineup… It’s not that I don’t like kid and I’m sitting him out because of that. I like other players.”

At this point, Kravtsov refusing to go on a conditioning assignment wouldn’t appear to be in his best interest if he wants to play in the NHL again this season.

Is Gerard Gallant on the hot seat?

After the Rangers suffered a third period meltdown against the Edmonton Oilers on Saturday, there’s been some questions regarding if Gerard Gallant is on the hot seat.

When Drury got the job last May, he fired his old friend David Quinn and started the search for an impact hire behind the bench. He had high hopes that either Mike Sullivan or Rod Brind’Amour would leave their Metro Division gigs at the time; neither did, and the Rangers opted for Gallant. If GM and owner are still pining for a headline name as a coach, Barry Trotz is out there, unemployed.Arthur Staple, The Athletic (subscription required)

There’s no doubt that the Blueshirts are struggling this season considering expectations. At the same time, it’s way too early to put last year’s Jack Adams finalist for coach of the year on the hot seat. However, with Barry Trotz out there it’s not out of the question if these bad losses continue.

I would classify this as upset fans venting for now. 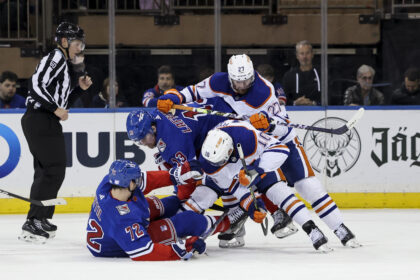