Rangers’ Alexis Lafreniere built to succeed in the NHL playoffs 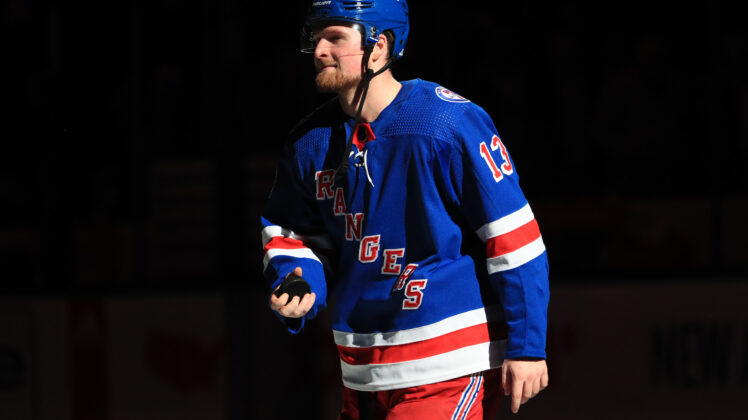 Alexis Lafrenière has been under a microscope ever since the New York Rangers won the lottery to make him the first overall pick of the 2020 Draft.

Jack Hughes, who was taken first overall by the New Jersey Devils in 2019 has yet to taste playoff action in his three seasons. Meanwhile, the kid from Saint-Eustache, Quebec could be a big factor for the Rangers against the Penguins as their series opens tonight.

“Growing up I watched the playoffs a lot. For me to play in it seems a little surreal,” Lafrenière said heading into his first ever postseason contest. “I’ll just try and enjoy it as much as I can and bring my best game.”

When the Rangers square off against the Pittsburgh Penguins in Game 1 of their first round series, Lafrenière will be a key player on the team’s third line.

The 20 year-old will be centered by skilled forward Filip Chytil and have the second overall pick of the 2019 Draft, Kaapo Kakko on the right. All three players were selected in the first round, and Chytil is the oldest of them all at 22. Kakko turned 21 just a few months ago.

This was a good year for Laffy. He ended the season strong with 4 goals, 2 assists, and 6 points in his final seven games. It helped him cap the year with 19 goals and 31 points in 79 contests.

“I feel good about my game right now. I’ll try to keep it going for playoffs, that’s what really matters,” he said. “But you have to play good in the playoffs too. That’s the main focus. It’s fun to finish the season on a good note but the real season starts (Tuesday).”

Alexis will need his linemates to step up with him. But he knows they have enough talent to get the job done.

“They’re really skilled and for us it’s just to make plays as a unit and be together out there and work for each other,” he added. “We’ll try to bring our game to another level and be ready. We’re all trying to play a complete game, and if all three of us play a two-way game, I think it really helps.”

Ever since Lafrenière started playing competitive hockey, he’s been a leader and a winner.

As captain of the Rimouski Oceanic, they lost in the third round of the 2018-19 QMJHL playoffs, with Lafrenière scoring 9 goals and 23 points in 13 games.

On the international stage, Lafrenière was named the MVP of the 2020 World Junior Championships leading Canada to a Gold Medal.

As an 18 year-old, he was a force in that tournament with 4 goals and 10 points in five games. In the final, he notched two assists to lead Canada past Russia 4-3.

In 2018, he captained Team Canada to a Hlinka-Gretzky Cup win. Lafrenière scored the eventual game-winning goal against Sweden in the Final and capped the scoring with his second of the game in a 6-2 victory.

So will the kid be fazed in the NHL playoffs where scrutiny of his game will become even more intense? It’s highly unlikely considering his background and the role he’s played as captain for both his junior team and Canada’s international squads.

“We’re all ready to go for (Tuesday),” Lafrenière said. “We’ve been waiting for this for a little while now. We feel really good about the group we have and it should be fun.” 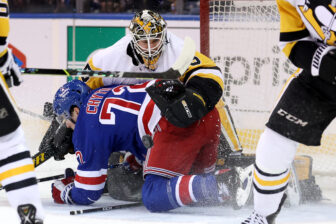 Also Read:
Will experience be a factor in Rangers series against the Penguins?

The Winnipeg Jets and Philadelphia Flyers are looking for new coaches. Meanwhile the Ottawa Senators are openly committing to spending money in free agency. Read more.