Report: Rangers out on Andrew Copp, plus Evgeni Malkin a free agent target

The New York Rangers will certainly be investigating the free agent market tomorrow at 12 PM ET as a new report indicates talks with Andrew Copp have broken off.

Per Arthur Staple of The Athletic, “Sources say the New York Rangers are out on Andrew Copp. Sides talked over the weekend but Rangers are likely looking elsewhere for their No. 2 center spot.”

This information also comes off the heels of future hall of famer Evgeni Malkin announcing he will be hitting three agency.

There appeared to be some hope over the weekend that Copp may return to the Blueshirts as it became public the two sides were engaged in talks.

Copp, 28, is believed to be looking for at least a 5 year-deal with an AAV of $5.5M. After a solid season where he picked up 21 goals and 53 points in 72 games he’s sure to get that, if not better. During the playoffs, he was one of the Rangers key performers with 14 points in 20 games further adding to his value.

The Rangers have already decided to let Ryan Strome walk via free agency and have been actively trying to address to position via trade to no avail at this time. Of course, this news regarding Copp is one less piece of leverage for Chris Drury in negotiations.

That’s why the need to look at the free agent market has become the most likely option.

Some targets could include Carolina Hurricanes pending UFA Vincent Trocheck and possibly Dylan Strome, whom the Blackhawks did not qualify.

Is Evgeni Malkin an option?

Evgeni Malkin will become an unrestricted free agent on Wednesday when the market opens. After 16 seasons all with the Pittsburgh Penguins this is a somewhat surprising turn of events.

Malkin, 35, was the Penguins first round pick, second overall, in the 2004 Draft. He’s a three-time Stanley Cup Champion with 981 career games to his credit. In his career, Malkin has amassed 1,156 points including 444 goals. He’s undoubtedly heading to the hall of fame.

According to Rob Rossi of The Athletic, Malkin was unhappy with the situation and in a text to the publication he asked: “Do they want me?”

“It bothers me how this is happening,” relayed one of Malkin’s teammates. “It’s a bad look. From what I know of what’s happened, Geno deserves better.”

Malkin recorded 42 points in 41 games last season after coming off knee surgery. He reportedly turned down a 2-year offer for $6 million per season, looking for at least for four years at that money value.

So is he an option for the New York Rangers? Well, that depends on how firm he is on wanting 4 years and $6M. I don’t think the Rangers would have an issue with $6 million for two years, but if it has to be at least four years, Drury can’t give him a full no move clause.

After speaking with a knowledgeable source, Forever Blueshirts learned that Malkin is already looking at the Rangers and Florida Panthers as his top destinations of choice.

Maybe after being spurned by the Penguins, Malkin may be more flexible in signing with the Rangers. Who knows, but we’re going to find out soon. 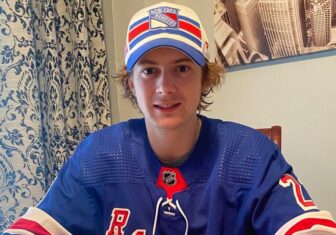