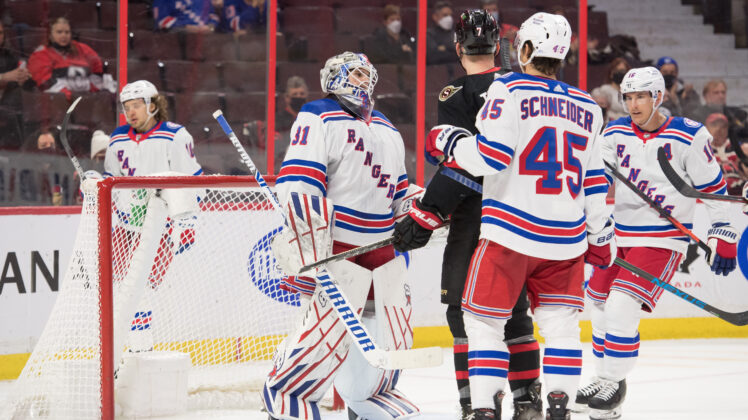 The New York Rangers and Senators squared off in Ottawa for an early evening game. It took some hard work and a power play goal for the Blueshirts to pick up another victory.

When it was over, Igor Shesterkin recorded the 50th win in just his 79th career game. He is now the 14th goalie in NHL history to get that milestone so quickly.

There was no slow start for the Rangers in this one, but that didn’t change the fact the opposition would score first for the third consecutive game.

Tim Stutzle, who Alexis Lafrenière is probably sick and tired of being compared to, benefited from a turnover by Filip Chytil. He came in 2-on-1 and opted to rifle it by Igor Shesterkin for a 1-0 lead at 15:08.

The Rangers did not let that get them down and responded with several strong shifts.

Just a little over two minutes later, the Blueshirts controlled the offensive zone. Artemi Panarin dangled the puck on a string by the boards waiting for a streaking Braden Schneider to hit the zone. His shot was deflected and Ryan Strome grabbed the puck to tie the game.

“He handles himself so well and he checks all the boxes,” Strome said of Schneider’s play. “We have things to clean up, but we have 40 good minutes in front of us.”

Rangers power play gets it done

The Rangers dominated the middle stanza by firing 15 shots to Ottawa’s 7. To his credit, goalie Filip Gustavsson was tough to beat and kept the Sens in it.

Panarin would give the Blueshirts the lead on the power play after drawing a hooking call at 7:48 into the period. After watching too many passes, the Breadman decided enough was enough and blasted the puck where mama hides the cookies. Mika Zibanejad and Strome would record the helpers.

“That second period we controlled play,” defenseman Ryan Lindgren said. “We don’t want to sit back in the third period and keep playing smart.”

Shesterkin almost gets a goal

The Rangers came into the third with their star goalie looking to lock it down. Whenever there was a lapse, Shesterkin was there to make the save. It didn’t matter whether he could see the puck or not, Igor was able to find it through traffic and eat it up.

In the end, the 26 year-old almost put a stamp on his young career, but he narrowly missed an empty-net goal by inches. Shesterkin is such an excellent puck handler and scoring a goal is certainly in his future.

“The sound (on the bench) was getting louder and louder as the puck was getting closer to the crease,” Strome said. “It’s only a matter of time before he gets one. He’s probably a better passer than 75% of the guys on the team, and they’ll openly admit that too.”

For Shesterkin, this was the 11th win in his last 13 starts. To make his season even more astounding, he’s allowed two or less in 15 of his last 20 starts.

“We trust him, he’s won a lot of games for us,” Gerard Gallant said of Shesterkin’s attempt for a goal that led to an icing. “If they would’ve knocked it down and score on us we’ll move on from that. I enjoyed it, I wish it would’ve went in the net.” 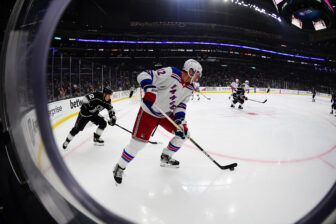