Rangers fall to the Islanders 2-1 after some questionable officiating; Kreider nets 40th 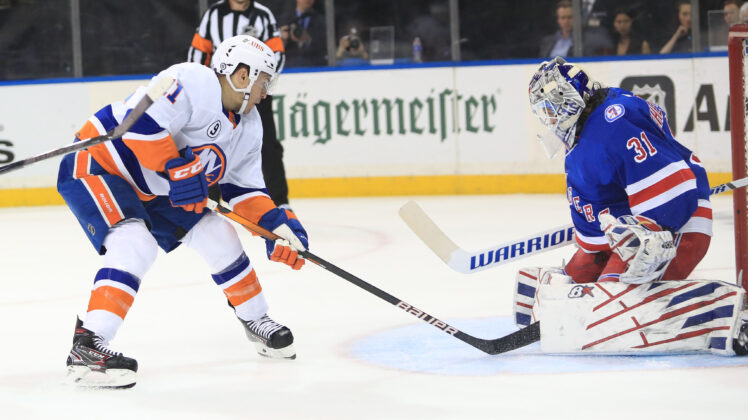 The Rangers and Islanders went at it on St. Patrick’s Day. While the beer flowed green, the two teams were seeing red as they renewed their rivalry for just the second time this season.

Unfortunately, the officiating in this game was some of the poorest in recent memory between these two teams. A missed elbow to the face of Ryan Lindgren caused a cut and a lost stick that eventually led to the Islanders game winning goal late in the third.

Kyle Palmieri scored the tiebreaking goal with 2:44 remaining in the third period, lifting the visiting New York Islanders to a 2-1 victory over the rival New York Rangers on Thursday.

The Rangers came out buzzing in the first period and newcomer Frank Vatrano almost had his first point in his first game. Feeding Artemi Panarin for a shot that Ilya Sorokin made a “save of the year” candidate stop on.

Sorokin highlighted his showing with a save on Artemi Panarin with 12:32 remaining. After Lee collided with teammate Brock Nelson in the defensive zone, the Rangers gained a two-on-one, but Sorokin dove to his right and used his stick to deny Panarin.

“Florida was home for me, but to be traded to a franchise like the Rangers is an absolute thrill,” Vatrano said. “I’ve always dreamed of playing here. The guys have welcomed me and I’m very excited to be here and help this team win.”

Lee opened the scoring 49 seconds into the second period. He gained enough separation from Rangers defenseman Jacob Trouba in the high slot and lifted the puck by Shesterkin after getting a pass from Mathew Barzal in the waning seconds of a power play.

Chris Kreider tied the game with 6:22 remaining in the second. He sped past Josh Bailey, streaked down the right side, got a pass from Alexis Lafreniere and had enough time to lift an off-balance wrist shot over Sorokin’s stick from the right faceoff circle.

Kreider joined Toronto’s Auston Matthews as the second player to reach 40 goals this season when he scored his league-leading 21st power-play goal.

“It was a lot of fun,” Vatrano said of his first game. “I wish we would’ve won.”

After Rangers defenseman Ryan Lindgren was elbowed in the face by Oliver Wahlstrom, the Islanders moved the puck up the right side. Ryan Pulock made a pass from near the right circle, Palmieri gained possession of the bouncing puck in front of the crease, batted it out of mid-air and lifted it over goalie Igor Shesterkin.

Palmieri’s 11th goal lifted the Islanders to the fourth win in five games (4-0-1) and capped a physical affair that saw both teams produce several chances and get timely saves from their goaltenders.

“I think the referees did a good job,” Gerard Gallant said. “To be honest I had more of a problem on the two penalties called against Strome and Goodrow earlier in the game. At the end, I thought it was a high stick, but it was an elbow.”

Islanders goaltender Ilya Sorokin produced a spectacular 29-save effort, with 12 of his stops coming in the opening period. He also prevented the game from reaching overtime when he made a point-blank save on Mika Zibanejad’s wrist shot with two seconds remaining.

“I thought we played a great game from start to finish,” Gallant explained. “Unfortunate they got the bounce at the end.”

Shesterkin finished with 26 saves and fell to 1-5-1 in seven career games against the Islanders. 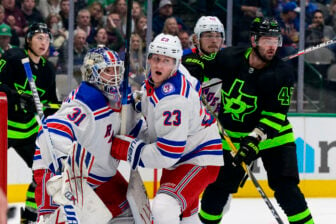