The clock is ticking for Chris Drury and the New York Rangers to make moves to bolster the roster. As the March 21, NHL Trade Deadline is just 4 days away some Rangers targets have started to come off the board.

Montreal received a boatload from the Florida Panthers for Ben Chiarot. The rental defenseman brought in 4 pieces that included a prospect, and two draft picks which included a first round selection in 2022. I don’t blame Drury for running away from this like he was trying to escape a bear in the woods.

Note that both teams retained 50% salary which likely garnered the extra late picks.

It has been a long time since the New York Rangers were in the buyers game at the NHL Trade Deadline. I think many fans have forgotten just how expensive it can be to play the rental game at this time of year.

The Rangers made a shrewd move by acquiring Frank Vatrano from the Panthers. Florida needed to clear some cap space to land Chiarot, otherwise it would’ve cost more than the 4th round pick Drury gave up.

However, as nice a little player as Vatrano is the Rangers need to get real scoring help on the right wing and it’s very likely going to cost them a first round pick.

New York has prioritized Ducks forward Rickard Rakell as that top 9 forward to address their lack of depth at right wing. GM Pat Verbeek is seeking a first round pick and if the Rangers want him, they will have to give it up (and maybe more).

Before you throw your phone or laptop across the room, I suggest you look at what Chiarot and Jarnkrok just landed.

Bottom line, if Drury does not get right wing that can score at this deadline, it will be a huge negative for the rookie GM.

Radulov, 35, will be a UFA this summer and makes $6.25M against the cap. A hit the Rangers can take in full with no issue. This season has been a real struggle for the big man with just 3 goals and 18 points in 52 games.

I can’t stress enough how this makes little sense to me. Plus the Stars are pushing for a playoff spot and have already said that John Klingberg and Brayden Holtby are off the table.

Friedman also notes that the Rangers are in the market for a left handed defenseman. We noted last night they are in on Seattle’s Mark Giordano but the Toronto native wants to play for the Maple Leafs.

Two other option could be Colin Miller in Buffalo or Calvin de Haan in Chicago.

The clock is ticking on the Rangers and things are expected to pick up this weekend, well in advance of the Monday deadline. What will Chris Drury do? The GM is expected to address the media today or tomorrow regarding the trade deadline. 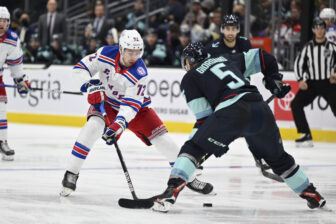 Also Read:
New York Rangers in on Mark Giordano; Rickard Rakell worth a first round pick