Rangers coach Gerard Gallant laughs off sloppy play, but it will lead to more cuts

The New Jersey Devils ran all over the New York Rangers at Madison Square Garden on Thursday night, and head coach Gerard Gallant shrugged it off.

“I’m glad it’s game three (of the preseason) and not five and six put it that way,” Gallant said with a laugh. “Sloppy and turnovers.”

By the time this exhibition game was done, the Devils outshot the Rangers by a 36 to 17 landslide. Even two shorthanded goals by his team wasn’t enough to overcome New Jersey constant attack.

“They kept coming and getting pucks behind us,” he added. “We had a tough, tough game.”

Yes, it is a meaningless preseason game, but as Adam Fox said in Boston, “you want to get into good habits.”

For the most part, the Rangers players that will be making the team almost regardless of what they do in exhibition action played okay last night.

The Kid Line of Filip Chytil, Kaapo Kakko, and Alexis Lafreniere was easily the best of the forward group. Mika Zinbanejad centering Chris Kreider and Sammy Blais, who was shaking off 10 months of rust were solid.

Not much can be said about most of the bottom six aside from Julien Gauthier and Brennan Othmann. Both played on a line centered by Patrick Khoderenko, whose struggles in rookie camp have carried over. I’d expect him to be sent to the Wolf Pack by this weekend at the latest.

Gauthier was playing in his second game and looked engaged driving to the net often. He actually scored on one of those plays but the net had come off the pegs disallowing the goal but drawing a Devils penalty. He led the Rangers with 8 hits on the night.

Othmann on the other hand was inconsistent compared to his first game on Monday, where he earned first star honors with two assists in the win versus the Isles.

The fourth line consisting of Karl Henriksson, Tim Gettinger and Adam Edstrom were nearly invisible for most of the contest. I’d expect them to also be included in cuts.

On defense, Adam Fox and Ryan Lindgren were alright as they work themselves into shape. However, the rest of the defense was left wanting.

Brandon Scanlin and Andy Welinski were a surprisingly decent pairing but didn’t distinguish themselves. I’d expect them also to be sent down to Hartford in preparation for the AHL season.

More concerning was the pairing of Libor Hajek and Matt Bartkowski, who could see his PTO coming to an end soon. As for Hajek, he was a -2 and hasn’t impressed when given a chance. Maybe the Rangers sent Matthew Robertson down too early. 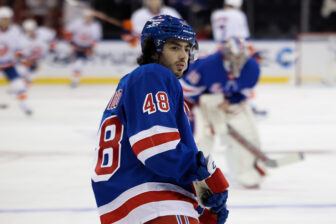 It wasn’t much, but the Rangers PK was perfect going 5 for 5 against the Devils and registering two shorthanded tallies.

“Yeah, yeah. That’s about it,” Gallant joked about the only thing that went right for the Rangers in the game.

Just 14 seconds after Igor Shesterkin was forced to trip up Tomas Tatar, Chris Kreider converted a 2 on 1 feed from Adam Fox for the shorthanded goal in the first period. Mika Zibanejad made the play on the line to create the chance and earned an assist.

Then in the third, it was all Alexis Lafrenière on a good read to take the puck and score a pretty solo effort.

“I’m still trying to learn the (PK) system and Kaapo is a good killer too,” Lafrenière said. “It was nice to get it but too late.”