The New York Rangers made their first appearance on ABC National Television against the Boston Bruins in the Thanksgiving Showdown.

It took some time for the team to get going and they were lucky to have a sharp Igor Shesterkin to keep them in it. However, once they got to skating, the Rangers walked out of Boston with two more points.

The two teams came into the contest feeling each other out for the first few minutes. That didn’t last too long as the Bruins started to dominate in all three zones. While the Rangers expectedly struggled in the faceoff circle, Boston kept things simple and drew two consecutive penalties on Chirs Kreider and Adam Fox.

New York actually killed them both, but a Jacob Trouba turnover proved costly and Craig Smith scored at the 14:46 mark. Igor Shesterkin simply couldn’t stop the high danger chance from the slot, but he did stop 16 out of 17 shots in the opening 20 minutes.

The Rangers, who just can’t help themselves from over passing the puck, managed just five shots on Jeremy Swayman. However, with just 6 seconds on the clock, Dryden Hunt found Artemi Panarin down low. The Breadman hit Ryan Strome in the slot to tie the game at one.

In the second period, the Blueshirts must have gotten the tryptophan from the Thanksgiving turkey out of their system. They certainly looked more alive and skated far better than they did in the opening frame, eventually outshooting the Bruins 19-12 in the middle stanza.

Boston would take a 2-1 lead off a blown faceoff coverage. Patrice Bergeron was all alone in front and put the puck over a prone Shesterkin 6:51 into the second.

The Rangers were not discouraged and had some glorious chances including one where Mika Zibanejad was robbed by Swayman diving back to a gaping net.

Dryden Hunt, who is making the most of his top six opportunity tied the game at the 12:33 mark. Off a rebound, Hunt didn’t just guide it home, he drove it dead center and busted the goal camera lens.

What ever traces of tryptophan that may have been in the Rangers legs was completely gone by the third period. The team played a spirited third period and made the most out of their opportunities.

Panarin would provide some extra Thanksgiving bread by stuffing the net with the eventual game-winner at the 11:35 mark. Strome found Julien Gauthier streaking down the right side. He drew the defender to him and made a cross ice feed that the Breadman buried.

Alexis Lafrenière would end the Bruins hopes with an insurance tally at 16:22. Gauthier, who had a great game used his speed for an odd man rush. His pass was perfect as Laffy went over Swayman for the 4-2 lead.

Trouba iced the game with an empty net goal, and the Rangers temporarily have moved into a three-way tie for first in the Metro Division.

“I don’t set expectations, but I am real happy with where we are at,” Gerard Gallant said of his team’s record. “I take it one game at a time. When I look at the stats on the way home on the I’ll be happy.” 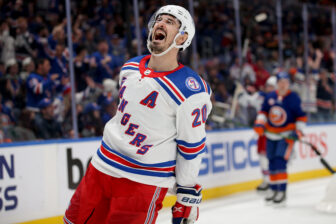