The New York Rangers will go with Alexandar Georgiev tonight against the Edmonton Oilers at Madison Square Garden.

Georgiev was recently taken off the COVID protocol list and has not played since December 17, a 3-2 shootout loss to the Vegas Golden Knights. A win tonight will extend the Blueshirts winning streak to three games after a sweep of the Tampa Bay Lightning.

The last time these two teams met was November 5th, a 6-5 OT win by the Oilers. New York blew a 4-1 lead in that contest with Georgiev in net.

This is the Rangers 7th set of back-to-backs for the season and Gerard Gallant has yet to use the same goalie in any of them, no matter which goalies are on the roster.

The New York Rangers announced earlier today, that both defenseman Ryan Lindgren and center Kevin Rooney are off COVID protocol. Both are expected to face the Oilers although Gallant would not commit to them being in the lineup during his pregame media availability.

Defenseman Patrik Nemeth’s availability is in question as he’s out with what Gallant called “a personal issue.”

A pleasant surprise was Zac Jones’ season debut playing with fellow rookie Nils Lundkvist. The rookie pairing finished a combined +2 and were solid throughout the game.

With Lindgren available it will be interesting to see if Gallant sits Jones or Libor Hajek, who has been playing with his partner Adam Fox. Rooney will take Tim Gettinger’s spot in the lineup as he was assigned back to the taxi squad.

UPDATE: Nils Lundkvist scratched with Ryan Lindgren’s return. Zac Jones will move to the right side to play with Libor Hajek. Rooney on 4th line, Gettinger out. 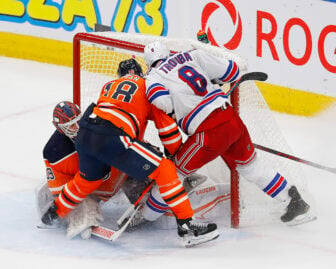