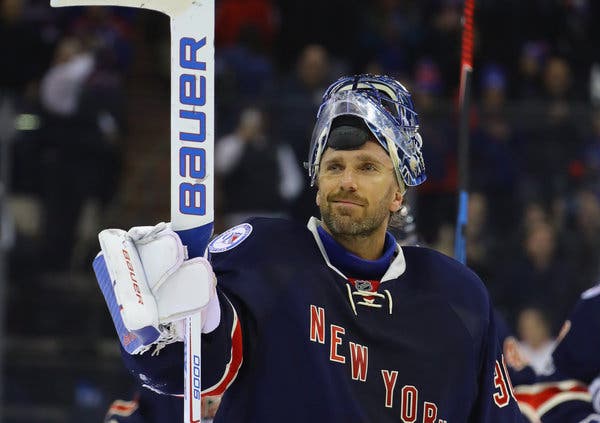 After a season that ended much earlier than we are used to seeing over the last decade, Rangers netminder Henrik Lundqvist talked with the New York Post about his new head coach, his health and his expectations for the 2018-19 season.

Lundqvist was very clear in his statement about his new bench boss, telling Larry Brooks that “college or NHL, to me it really doesn’t matter. What matters is the knowledge of the game and how to use it the best way possible.” Lundqvist is clearly sold on his new head coach and the new ideas that he can bring to the organization. And with the tumultuous relationship Lundqvist had with his former boss Alain Vigneault, like being blamed for last year’s Rangers struggles, there is certainly reason for King Henrik to be excited about the regime change.

During the exit interviews back in April, it was revealed that Lundqvist had been dealing with an irritating knee problem all season. Lundqvist says he’s fully healthy and he has already started his summer training in Sweden. “I decided to spend more time on the ice this summer to work on all aspects of my game. Last season ended early and I didn’t want to wait until early August like I normally do. It has nothing to do with my age.”

First session since my knee injection, felt really good out there. ?? Planning on skating more this summer to work on my game. Easy to get inspired right now when you watch the NHL playoffs and the World Championships. See it, believe it, achieve it! ???

While reflecting on last year’s, shall we say horrendous, campaign, Lundqvist described the season as two-faced. “The first half we were right in it, and personally I felt as good as I have in years. The second half was definitely more challenging for many reasons. Injuries to important players and the decision to rebuild obviously had major impacts on the outcome.”

One of the biggest issues for the Rangers over the last couple of years was their defensive-zone coverage. Aside from the poor puck management, the team struggled with simple communication and defensive assignments, things that should not be an issue at the professional level for more than a few games. The Blueshirts just couldn’t find a way to put it all together for more than a couple games.

When Brooks asked Lundqvist about what he expects for next season, Henrik said he doesn’t know what to expect. “We don’t even know what the team will look like.” Lundqvist added that he won’t be able to give any “real expectations” until the team convenes for training camp in September when he sees the talent in front of him.

While he doesn’t have any expectations for the team, he says that his attitude won’t change. “My approach will not change, though. My mindset right now is that I want to show up at camp in great shape and be ready to have a strong year.”