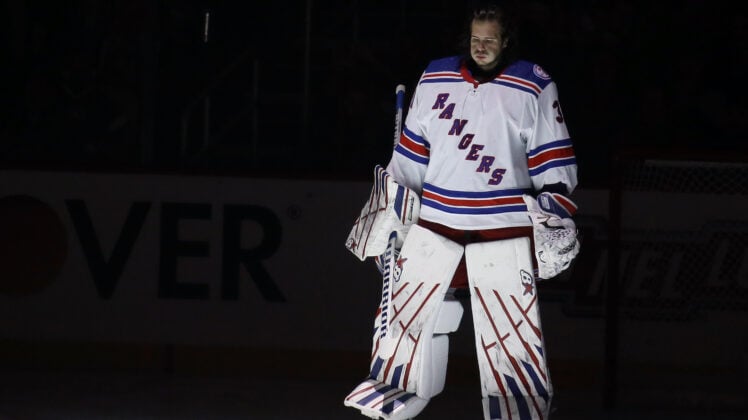 New York Rangers goaltender Igor Shesterkin is having a season for the ages in between the pipes. While he is clearly the MVP of the team, he is not only vying for the Vezina Trophy as the NHL’s best goalie but the Hart Trophy for league MVP as well.

However, his video game like SV% is challenging the all-time single season mark set by legendary goalie Jacques Plante.

It was in that same season Plante established the highest mark ever for a SV% for goalies with a minimum of 30 games played. The record Igor is chasing is .944 set by Plante in 40 games.

Currently, Shesterkin’s SV% also ranks first overall in the league and his 1.96 GAA in good for second behind Bruins’ Jeremy Swayman’s 1.95 GAA.

“He’s been great and he continues to be great,” Jacob Trouba said.

The Blue Jackets honored Nash in a pregame ceremony and raised his No. 61 banner into the rafters at Nationwide Arena before a 5-4 shootout loss to the Boston Bruins.

Nash spent the first nine years of his NHL career with Columbus after the organization made him the first overall pick in the 2002 NHL Draft. He is the Jackets’ all-time leader in games played (674), goals (289), assists (258) and points (547).

The left winger also spent six seasons with the New York Rangers before finishing his career with 11 games for Boston in 2017-18. He scored 437 goals in 1,060 games.

“This banner doesn’t represent what I did,” he said, addressing the fans. “It represents what we did. … I am so humbled.”