Rangers Igor Shesterkin does not file for salary arbitration; is an extension coming

The deadline to file for player-elected salary arbitration was yesterday. Seventeen players opted to do so, yet Rangers goalie Igor Shesterkin didn’t. Is a new contract in the works for the Rangers number one goaltender?

It should also be noted that club-elected arbitration is today at 5 PM ET.

Igor Shesterkin does not file for arbitration

Salary arbitration is where a third-party arbitrator determines a fair contract at a scheduled hearing. Both sides can continue to work on a new deal and avoid the arbitration date.

If the case does get in front of an arbitrator, the team can elect to walk away from the deal, thus making the player an unrestricted feee agent.

The last time the Rangers went that far in the process was with Nikolai Zherdev. Back in 2009, the Rangers tendered him a qualifying offer of $3.25 million, but he was awarded a one-year award of $3.9 million. Glen Sather walked away from the minuscule difference and he became a UFA. It still ranks as one of Sather’s poorest decisions during his tenure with the Blueshirts as GM.

What can we expect Shesterkin’s contract to look like

This past season, Igor Shesterkin made 35 appearances winning 16 of those games. The 25 year-old was tied for 7th in the NHL in SV% (.916), and 11th in GAA (2.62) for all goalies having played at least 25 games. When you use that same minimum games played among rookies, Shesterkin was the top backstop in SV% and ranked second in GAA to only Dallas Stars netminder Jake Oettinger (2.36).

Two recent contracts that could serve as benchmarks for a new Shesterkin deal are Thatcher Demko in Vancouver and Jordan Binnington in St. Louis.

If Shesterkin were to sign a bridge deal he could see something in the $3.5 to $4.5 range for two years. Now should Drury want to lock him up a little longer the cost would be closer to $5.5 million. That’s if the deal is for at least four years, should they want to add term it will start to climb to the tune of a half million for each year they add on. 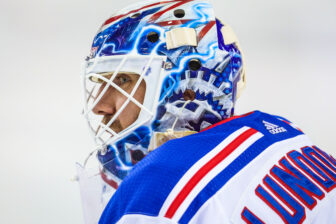 Also Read:
Henrik Lundqvist wants to play again; is there a path to return to the Rangers

Get up to speed on all the latest NHL rumors. Read more.