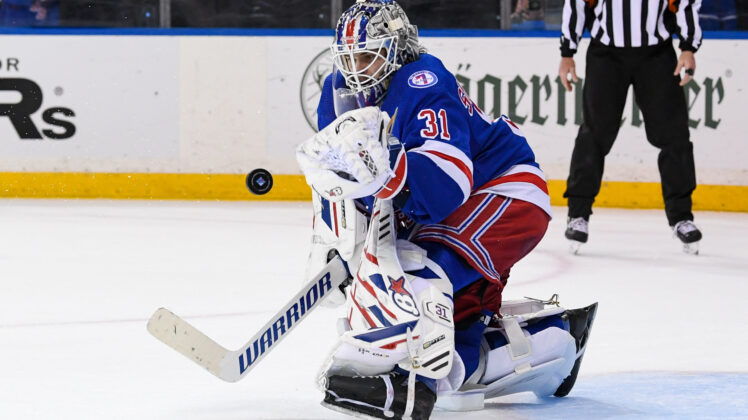 The New York Rangers rallied in the third period against the Philadelphia Flyers on Sunday night. They could’ve just packed it in, especially when you consider that Philly made it 3-0 just 44 seconds into the final frame.

Instead, the Rangers battled back and tied the game to earn a valuable point.

“It was a good point, no doubt,” Gerard Gallant said on the MSG broadcast. “Being down 3-0, to battle back to get that point– it’s a big point.”

One player that did not seem very pleased about last night was goalie Igor Shesterkin.

After a tough game against the New York Islanders on Friday, Igor got off to a shaky start versus the Flyers. It started with a wobbly slap shot that went over his glove to give Philly a 1-0 lead. That was followed by a bit of breakdown in the defensive zone with Owen Tippet snapping one to beat his glove side again for a 2-0 lead in 50 seconds.

The MSG broadcast noted that Shesterkin kept putting his glove to his head over and over in frustration.

Shesterkin settled down and made several huge stops, including two Tippet breakaways to keep the Rangers in it. However, after the game he wasn’t in any mood to talk about his own play.

The Russian born goalie, who normally needs a translator to understand and answer most questions gave a quick response in English regarding his performance.

“I’m a little bit frustrated,” he added via a translator. “You really want to keep winning but I’ll keep working on my game.”

While Shesterkin’s numbers this season are Vezina worthy with a GAA of 2.14 and a SV% of .933, he has struggled lately.

The Rangers recorded the tying tally off the stick of newcomer Andrew Copp. Despite not picking up a win, he sees longterm value with the third period comeback.

“It was a really good comeback by us in the third,” Copp said via NHL.com. “It seems like there’s a lot of belief. We feel like we are a really good team, so really good teams can come back in games like that. Even though we didn’t get the extra point at the end, I think the confidence gained from the way we played the last two periods and to be able to come back from something like that is going to happen in the playoffs for sure.”

Copp, 27, will be a pending UFA this summer and could possibly be a cheaper option at second-line center if they can’t afford to extend Ryan Strome.

He has recorded 3G-5A for 8 points in 7 games since being acquired at the NHL trade deadline. This season, Copp has registered 43 points in 63 contests (16G -27A).