Rangers inquired on Seth Jones; due diligence or something more?

According to The Fourth Period, the New York Rangers are one of several teams to inquire on Columbus Blue Jackets defenseman, Seth Jones. The 26 year-old right-handed shot is considered one of the game’s top blue liners. He is forcing Columbus’ hand to trade him as he notified them he intends on becoming a free agent next summer.

Several teams have expressed interest in Jones, with the Flyers certainly leading the charge. It is believed the Calgary Flames, Chicago Blackhawks, New York Rangers and Winnipeg Jets have also inquired, at some point, on Jones’ availability.

Jones is coming off a season where he recorded 28 points in 56 games. Trading him as a rental at the next NHL Trade Deadline will result in the lowest return possible. However, a move at the Draft would maximize the package.

Of course, the return would have to predicated on if Jones would be willing to negotiate a contract with the acquiring team. Otherwise, the package would only be slightly better than a deadline rental.

“Whatever happens is going to be what’s the absolute best for the Blue Jackets franchise, period,” Davidson said. “That’s just how it works. Doesn’t matter if it’s Seth Jones or Joe Smith, the player has the right through the (collective bargaining agreement) to do what they feel is necessary for them and their careers. 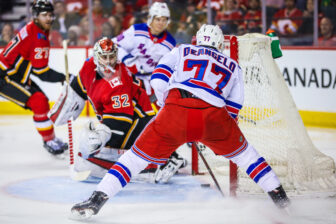 The Rangers are overloaded on the right side

Are the Rangers really interested in Seth Jones, or is this just a case of due diligence?

The biggest issue is the fact he is another righty. Jacob Trouba and Adam Fox are all but cemented as the top two on that side. You don’t trade for Jones to play him on the third pair. The only other possibility would be to play Jones or maybe Trouba on the left side to accommodate.

For me, this is likely a case of Chris Drury doing some due diligence to see what the Jackets are asking for. Aside from Jones being to cost prohibitive in terms of his next contract, the trade package would likely require K’Andre Miller going the other way. That is quickly becoming a big no for the Rangers.

I believe Drury wants know the trade demands because the team most likely to land him is a divisional rival. The Philadelphia Flyers are said to be the top landing spot for Jones, and that’s where I believe he ends up.

Flyers closing in on Seth Jones