Kakko was skating along the left wall while tied up with Tyler Bertuzzi when he fell. His right leg went underneath him as he went into the boards. The 21 year-old went right to the locker room, although medical trainer Jim Ramsey stayed behind.

When the second period began, Kakko did not return. No word from the New York Rangers at the midway point of the game.

Update: The New York Rangers have announced that Kakko is out for the game with a lower-body injury

This season, Kakko has had two stints on the injured list.

During his latest injury, which was also an upper-body issue, it was believed he would be back before the March 21 Trade Deadline but it never came to be.

The Rangers first pick (second overall) of the 2019 draft has really had a hard time getting things going this season due to injuries.

Kakko has only been able to play in 40 games and has just 7 goals and 16 points for a .40 points per game average, which is only slightly better than last season’s .34 average.

Check back with us for updates on the situation. 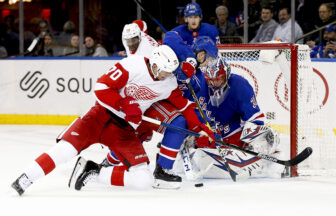