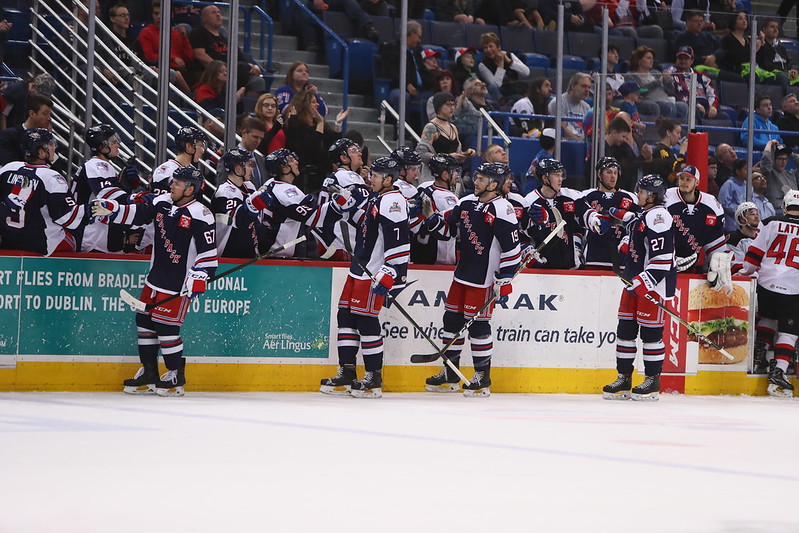 It’s go time. The regular season for the Wolf Pack begins on Friday night. The club has finalized their roster, which has the potential to make noise in the American Hockey League. I’m excited about this season since the organization has stocked up for the farm and the youth movement has begun in the big club.

Hartford defeated Bridgeport by the final of 2-1. Shawn St. Amant registered both goals for the Pack. Brandon Halverson started in net and stopped 21 of 22 shots.

“I really liked our compete to loose pucks,” Wolf Pack head coach Keith McCambridge said. “We did a good job using our speed in the offensive zone to generate second and third opportunities.”

The Pack looked impressive in the outing as they had multiple chances and good transition. The players were playing with energy and precision from puck drop to the final buzzer and the Pack outshot Bridgeport 43 to 22.

The Pack have two goalies, eight defensemen, and 14 forwards.

Lines will be determined later in the week when they approach Friday’s game.

The following players were sent down to Maine of the ECHL.

Week one of the AHL season features two home games for the Wolf Pack, and the first road game will be in the following week.

You can listen to the Pack on the iHeartRadio app on your mobile device. On the desktop, you can listen through here. The Pack is on News Radio 1410 WPOP Hartford.

There are minor tweaks this season for the AHL. However, the biggest change is when a team takes a penalty. This raises the stakes higher.

The Pack has to be smart when taking penalties. Otherwise, this could bite them in critical moments in the game. This is being tried in the AHL, and if successful, it could be in the NHL down the road.