The New York Rangers won’t be trading Ryan Strome at the deadline according to a report by Larry Brooks in the NY Post. That doesn’t mean the two sides are any closer to a deal for a new extension.

Strome, 28, has 34 points in 45 games this season and is making $4.5M on his current contract which expires in July. Artemi Panarin’s favorite center will likely fetch over $6M if he hits the open market. That’s not a number the Rangers are comfortable with heading into the next few seasons due to the flat salary cap and expiring entry-level contracts.

Multiple reports indicate that a significant gap exists between the two parties, with the most recent being in The Athletic this week. And as both sides continue discussions, there’s some similarities I’ve noticed with how Chris Drury is conducting business in these negotiations.

The New York Rangers came to terms with #1 center Mika Zibanejad on an 8 year extension with an AAV of $8.5 million back in October. It was a great deal, especially considering that many pegged his next contract to be closer to a $10M AAV.

However, leading up to Mika’s signing, Forever Blueshirts had learned through a well placed source that the Rangers would remain in Jack Eichel trade talks until the deal was inked. That held true as the Golden Knights were able to acquire the disgruntled center from the Sabres just a few weeks later.

Basically, the Rangers interest in Eichel was an unspoken bargaining chip that Chris Drury had in his back pocket. Eichel was a plan B if Zibanejad was unwilling to come down a little on his ask. New York obviously did that by giving Mika the 8th year as security.

So now we are seeing something similar play out with Strome’s contract talks. Of course, that is impossible to confirm since Drury will never tip his hand.

The Rangers are said to be in heavy pursuit of J.T Miller, who may also act an insurance policy if Strome doesn’t extend per multiple reports. One thing that was made clear to me is that trying to keep both Strome and Miller would be a challenge. It may also put them at greater risk of a Kaapo Kakko offer sheet they would be hard pressed to match.

One source told me back in December, if the term is right, Strome may accept $5.75M. The question being what that magic number of years is for the veteran center. A seven or eight year deal, even at the Rangers desired money value would hamper the team in the future. It also means their top two centers will be in their mid-30’s during the prime years of kids like Fox, Kakko, and Lafrenière.

It’s not ideal future situation. What Chris Drury needs to do is hit his number and maybe get Strome to accept a four or five year deal. In order to do that, he needs leverage.

Ergo the J.T. Miller trade talks with the Vancouver Canucks.

Drury was successful in getting Mika to take a little less, but this time around h appears to be looking for Strome to go lower.

Will he be successful in retaining Panarin’s favorite linemate? It remains to be seen and will be the most interesting storyline regarding the Rangers come the NHL Trade Deadline on March 21. 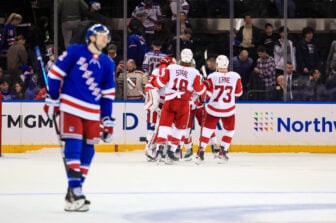