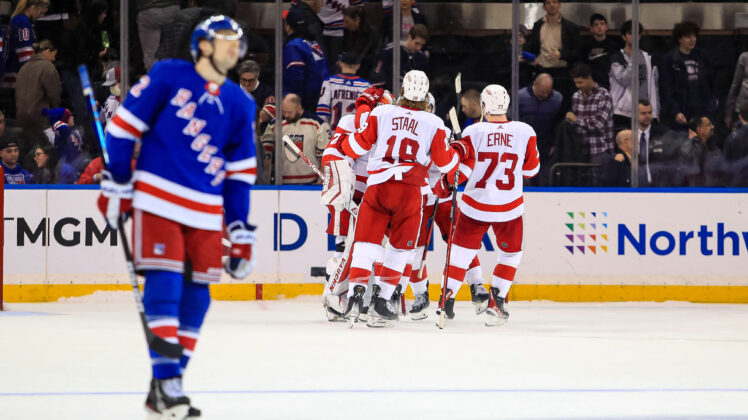 The New York Rangers fell 3-2 in a shootout to the Detroit Red Wings at MSG on Thursday night. It was another game where the team came out of the gate slowly picking up their first shot on goal a little over eight minutes in. The prior night against the Boston Bruins it took almost 13 to put one on net.

“The second half of the game, I liked our game, but the first half we came real flat, obviously, and Detroit took it to us pretty good,” Gerard Gallant said in a post game presser that lasted all of 39 seconds. “It should have been more than 1-0 but Shesty played real good… We probably got the one point we deserved, but no more.”

Troy Stecher gave Detroit a 1-0 lead 2:18 into the game when his shot from the point bounced off Rangers defenseman Zac Jones and went past Shesterkin’s stick. Adam Erne picked up the only assist on Stetcher’s first goal of the season.

K’Andre Miller tied it at 12:18 of the second period, circling the Red Wings’ net and jamming the puck past Greiss for his fourth of the season. Barclay Goodrow earned the lone assist on an absolute highlight reel tally.

But Dylan Larkin put Detroit ahead 2-1 at 13:48 with his team-high 26th goal. Danny DeKeyser took a shot from the point that bounced off the end boards and right onto Larkin’s stick for a quick shot past Shesterkin. Seider was credited with the second assist.

Mika Zibanejad’s power-play goal at 11:51 of the third period got the Rangers even at 2-2. He one-timed a pass from Adam Fox over Greiss’ right shoulder for his 19th goal of the season, with Panarin earning the second assist. The goal came on New York’s lone power play of the game; Detroit went 0-for-3.

Shesterkin forced overtime with an excellent glove save on Larkin in the final minute of regulation. He finished with 31 saves on the night, including 4 stops in the shootout.

Pius Suter scored to start round six, and Thomas Greiss (37 saves, 5 shootout stops) stuffed Filip Chytil’s wrist shot for the win. Detroit’s Lucas Raymond and New York’s Mika Zibanejad each scored in the first round of the tiebreaker.

Rangers know they need to be better

After the game, the players understood that despite firing 39 shots, which also consisted of over a dozen glorious scoring chances, they need to improve on playing a full 60.

“After the first 10 minutes we settled in and played our game,” Barclay Goodrow explained. “I think we still need to work on starting games better.”

The Rangers mustered only 8 shots on Greiss in the first period, with 7 of them coming after the 10 minute mark. They were out-shot 11-8 after one period, but from that point held a big advantage of 31-22 for the final two periods and OT combined.

“We had a little bit of a sluggish start and it’s alway tougher to play from behind,” Adam Fox admitted. “It’s something to clean up.”

Even though the team didn’t come out with a win, they still maintained a positive outlook. And why not? It has served them well all season so far.

“It’s tough not getting the extra point but we played hard,” Adam Fox explained. “You always want to come away with two points, but getting one is better than none.” 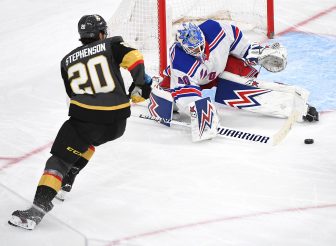