The New York Rangers took on the Detroit Red Wings for the first time this season and it turned out to be an exciting contest.

Longtime Blueshirts defenseman Marc Staal made his return to the Garden since his trade in 2020. After 13 seasons on Broadway, he received a video tribute and a standing ovation.

“How he competed– the mix of professionalism on and off the ice, but a funny guy,” Mika Zibanejad said of Staal. “Good guy to be around. It was awesome to be his teammate.”

Detroit came out of the gate buzzing early and were rewarded with a little bit of puck luck.

Just over two minutes into the game, an innocent Troy Stecher shot caromed off the skate of Rangers’ defenseman Zac Jones and past Igor Shesterkin. It gave the Wings a lead that goalie Thomas Greiss helped hold up for the first period.

“We’ve got to keep going,” Zibanejad said after his line almost tied it several times. “We know what we have to do to be successful.”

The Rangers came out with a lot more purpose in the middle frame as they fired 18 shots at Greiss.

Despite the peppering, the Blueshirts only got one goal in the period thanks to a dazzling play by K’Andre Miller. It began with Barclay Goodrow winning a draw back to the rangy defenseman. Miller then used his speed and reach to score a gorgeous wraparound goal.

Once again, puck luck was on Detroit’s side. Dylan Larkin was left alone at the side of the net when a shot banked off the boards and right on to his stick to put the Wings back up 2-1 just 90 seconds later.

The Rangers had yet to get a power play in the game and fans thought they had one after an illegal check from behind crushed Julien Gauthier. Unfortunately, it was Dryden Hunt getting the extra two-minutes for defending his teammate.

After a serenade of “These Refs Suck” by the Garden Faithful, Detroit was finally called for a penalty when Robby Fabbri tripped Adam Fox.

On their only PP, Artemi Panarin and Fox set up Zibanejad for his patented blast from the left circle to tie it up.

New York kept coming in waves deep in OT, but Greiss was playing out of his mind on this night stopping 37 shots. Igor Shesterkin went toe-to-toe until Pius Suter beat him in round six of the shootout and Filip Chytil was stuffed by Greiss’ pad.

The point closes the gap with the first place Penguins to three. Pittsburgh lost tonight 4-1 to the Maple Leafs.

“First half we came out real flat, but second half we played real good,” Gerard Gallant said. “We probably got the one point we deserved.” 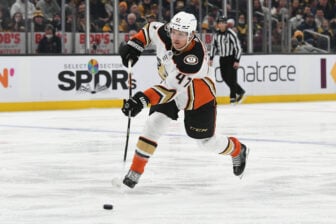