Rangers and Penguins square off for first time since playoffs

The New York Rangers and Pittsburgh Penguins will square off for the first time this season on Tuesday night at PPG Paints Arena. They last met in the first round of the Stanley Cup Playoffs last season where the Blueshirts rallied back from a 3-1 series deficit to advance to the next round.

It all began with a collision between Jacob Trouba on Sidney Crosby in Game 5 and ended with an Artemi Panarin OT winner in Game 7 to send the Rangers on a run that eventually ended in the Eastern Conference Finals to the Tampa Bay Lightning.

Now these two teams are separated by just a point in the standings. A win by the Rangers tonight will extend their season-high winning streak to 8 games and increase their hold on third place in the Metro. A loss would have the Penguins jump them in the standings and put the Blueshirts in a wild card spot.

Rangers look to down Penguins

There’s a lot of expectation that there’ll be some bad blood between the two teams thanks to some pretty big hits in that series.

Defenseman Ryan Lindgren crushed Rickard Rakell in Game 1 and knocked him out of the playoffs. Trouba’s incidental collision knocked Crosby out for the remainder of Game 5 and all of Game 6. He did return for the Penguins elimination in Game 7.

In reality, the Penguins are looking for two points more than they are trying to get payback on either Lindgren or Trouba. The fans in Pittsburgh on the other hand will probably put a lot of energy into booing Trouba.

Penguins’ fans may want to proceed with caution as Trouba usually thrives playing off emotion. Heading into Game 6 in Pittsburgh last season, Trouba was asked about being Public Enemy No. 1 after hitting Crosby. “It’s okay, it won’t be the first time,” he laughed.

The Rangers lineup could have a new look tonight if Filip Chytil is unable to play. On Sunday in Chicago, he took a late high hit from Sam Lafferty that sent him to the locker room for the remainder of the game. He’s listed as day-to-day with an upper-body injury.

It’s a shame because Chytil was hot with four goals and six points in his last six games.

New York is currently riding a 7 game winning streak and looked like a machine against the Blackhawks in a 7-1 win. This will be the final contest of their 3-game road trip and also their third game in four nights.

“We’re finding ways to win hockey games,” Gerard Gallant said. “We’re just playing as a group, and it’s four lines and six d-men and the goaltender that’s playing good, solid hockey. You get on a little roll and things happen good. We weren’t getting much puck luck the first part of the season, now we’re getting a lot more of it.” 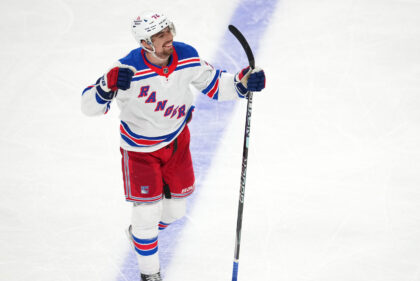 The Penguins are coming off a loss against the Carolina Hurricanes on Sunday, but prior to that they rattled of 7 seven straight wins themselves.

Sidney Crosby is having a stellar season at the age of 35 as he leads the team in scoring with 40 points in 31 games.

Kris Letang, who suffered a stroke earlier this year is also back on the ice and helping lead the Penguins high-powered attack from the blue-line. 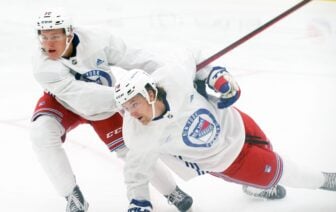