Adam Sykora was taken in the second-round of the 2022 NHL Entry Draft. It was the New York Rangers first pick of that draft after losing a first-round selection as a condition of the Andrew Copp deadline trade with the Winnipeg Jets last season.

The 18 year-old is currently playing for HK Nitra in Slovakia with 2 goals and 9 points in 20 games this season. Sykora was also taken as the first overall pick by the Medicine Hat Tigers in the 2022 CHL Import Draft.

According to Sportsnet’s Jeff Marek, he reports the Rangers are looking to bring the prospect over to North America after the World Junior Championships end in January. If that happens, a trade is waiting to send him from the 8th place Medicine Hat Tigers to the 3rd place Saskatoon Blades in the WHL’s Eastern Conference.

“There’s been talk about the New York Rangers bringing [Sykora] over to play in North America,” Marek said. “Medicine Hat is a team that’s not doing much right now. There is a deal in place for Medicine Hat to trade him to the Saskatoon Blades.”

The Rangers signed Sykora to his three-year entry-level contract at the end of Development Camp this summer with an AAV of $950,000.

Sykora registered 10 goals and 17 points in 46 games with Nitra last season. He added two goals in five games for Slovakia at the 2021-22 Hlinka Gretzky Cup and one goal in four matches at the last World Juniors in August.

The feisty winger is known for his relentless forecheck and ability to get under his opponent’s skin. He showed that in his one preseason game against the Isles in September. Despite not being very big at 5-10 and 172 lbs, Sykora didn’t look out of place in the game against much larger NHL players. He was strong on the puck and showed no fear of getting involved in the play.

Recently, Sykora was involved in a brawl during a floor ball game per Sport.sk out of Slovakia. The incident involved Sykora being taken down hard and having words with the opposition player that caused the unpenalized infraction. Both teams reportedly went at it. Sykora was not found of any wrongdoing.

The Rangers organization wisely are assessing the situation and likely feel it best to have him start developing his game for the North American style of play as soon as possible. 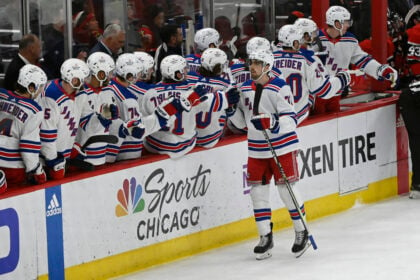