The New York Rangers announced on Friday, the last day of Development Camp, that they’ve signed Adam Sykora to a three-year entry-level contract. Financial terms have yet to be disclosed.

Sykora was the first player the Rangers drafted in the second round of the 2022 NHL Draft. The 17 year-old Slovak, recorded 10 goals and 17 points in 46 games with Nitra. He added two goals in five games for Slovakia at the 2021-22 Hlinka Gretzky Cup.

“He’s a great kid, great personality and he plays fast, he’s tough,” Former NHLer and Slovak Coach Craig Ramsay said. “He’s little, but he gets knocked down and he doesn’t care. He just goes back and plays.”

The winger, who isn’t very big at 5-10 and 172 lbs, describes himself as a physical player that likes to get under the skin of his opponents.

“I really like Brad Marchand because he’s like a rat and he’s not scared of [bigger players],” Sykora laughed at the draft. “I try to play that way.”

At development camp, he’s lived up to the reputation as being a ball of energy out there. Obviously, he impressed Chris Drury and management enough to earn his first contract.

“It’s part of my game,” he said after an aggressive scrimmage. “Stop before the net and get some conflict.”

The signing also makes Sykora eligible to report to the Hartford Wolf Pack is the Rangers feel that’s best for his development. 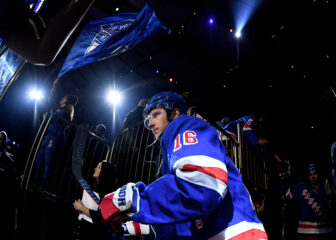