The New York Rangers and Ryan Strome said their goodbyes to each other on Thursday. Far too often the very human aspect of the game is what gets lost in the process of doing business in sports.

That was on full display as Strome, an emotional leader, said his goodbye after signing with the Anaheim Ducks for 5 years and $5 million per season.

“Loved and embraced every minute of playing at MSG and being a New York Ranger,” Ryan Strome said. “My family and I are going to miss everyone from the training/equipment staff, amazing people behind the scenes, and most importantly a great group of guys in the room. A big thank you for everything!!!

“Really humbled and excited for the next chapter with the Anaheim Ducks. According to my kids I’m Daddy Duck now. SoCal here we come, can’t wait… LFG!”

On November 16, 2018 the New York Rangers made a trade that at the time no one really thought too much of by sending Ryan Spooner to the Edmonton Oilers for Ryan Strome.

How wrong everyone was about that.

In fairness, the former #5 pick overall in the 2011 NHL Draft by the New York Islanders was considered a bust. With just 162 points in 358 games between the Isles and Oilers, the Rangers were taking a gamble on the then 25 year-old.

It paid off big for the Rangers as he recored 195 points in 263 regular-season games through four seasons.

His role during the rebuild should not be downplayed or overlooked either. More important than any of his on-ice accomplishments was what he did off the ice in the locker room.

The Rangers’ alternate captain helped the young players grow and mature. Alexis Lafreniere took the time to acknowledge Strome leaving with a heart emoji on Instagram. He wasn’t alone with K’Andre Miller calling him a “legend.”

The sentiments were felt by his Rangers teammates with one of his fellow alternate captains Jacob Trouba posting a farewell note of his own.

“A great teammate, leader, and friend,” Trouba wrote. “The tough part of pro sports. You got a good one Anaheim Ducks.”

One player that is surely upset with the news that Strome is heading elsewhere is linemate Artemi Panarin. The two had great on-ice chemistry but also forged a lifelong friendship.

“I think we work together pretty good and there’s good energy in the locker room, off ice too,” Panarin said of Strome in December. “Good friends. We respect each other.”

Ryan Strome was a great Ranger

In the end, Strome spent a short time on Broadway and made a real impact. Fans love to joke about him missing empty nets, but he loved being here and wore his heart on the sleeve of his Rangers jersey every day.

“Obviously my heart’s here,” he said fighting back tears after the season ended. “The last four years I’ve tried to pour everything into this thing on and off the ice. I can’t predict the future but all I know is I love these guys and this team is destined for great things. It’s a little emotional. Honestly, it’s a great group of guys and I hope there’s more.”

When he got here, the team was in shambles embarking on a rebuild. Strome now heads off for Anaheim after helping turn the team around into one of the NHL’s best.

Despite this being the end of the road for Strome, he was a great Ranger. Not because of his stats but for how much he cared and loved being in New York. His leadership and mentoring in the locker room is the legacy he leaves behind for one of the younger Blueshirts to pick up and carry on. 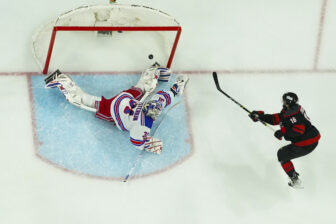 Also Read:
Vincent Trocheck and Rangers had sights set on each other