Prior to practice, the team announced that Filip Chytil was out with an upper-body injury.

Chytil, 22, left early in the first period against the Calgary Flames after an accidental collision with teammate Sammy Blais.

After the two players collided, Chytil went down and laid face first for several seconds in pain trying to collect himself. Eventually he would need help in getting off the ice and did not return.

Chytil only has 3 points in 12 games this season.

“I thought he was possibly going to skate today but he’s still day-to-day,” Gerard Gallant said. “There’s a chance (he’ll play on Saturday), but we’re still a few days away.” 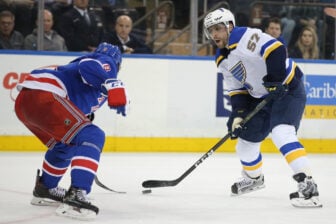 After the Rangers won against the Panthers, Igor Shesterkin was named the number one star but did not come out for the customary lap. When asked Gallant said that it was “blown out of proportion.”

“He had the stomach flu, same as I had,” Gallant, who sounds audibly sick revealed.

Was that really the case? Larry Brooks noted in a recent article that Shesterkin was upset by being run over by Anthony Duclair, then repeatedly bumped by other Panthers’ players as a reason for not coming out.

Those sentiments were also echoed by Arthur Staple of The Athletic yesterday. “[Shesterkin] was likely upset, too, that his team — which has touted the toughness it added this past offseason and what a deterrent it would be — did nothing to keep Florida’s forwards from barreling into the crease and jostling him around throughout the game,” he wrote.

Forever Blueshirts has learned that there’s a ring of truth to everyone’s comments on the matter. Apparently, it’s making the rounds that Shesterkin was none too pleased with no one responding to protect the Rangers bread and butter this season.

Aside from Duclair plowing into him, there were at least three occasions where Panthers players bumped him. On Florida’s first goal, Gallant likely should have challenged as a Panthers player was lying on top of Shesterkin’s pads preventing him from moving.

Here’s the deal, the next opposition player to even set a skate in the crease needs to be hammered. If not, we could be seeing a lot more “bumps” to get Shesterkin off his game. 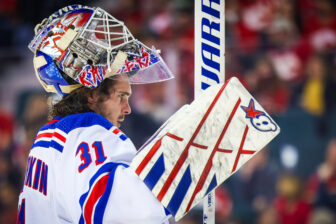