The New York Rangers walked out of Madison Square Garden with another feather in their cap. This time by beating the undefeated Panthers in regulation.

Of course, anyone who watched the game left it with a level of concern. A 4-0 third period lead was almost not enough to get it done, at least not comfortably.

Gerard Gallant was pleased with getting two points against the Panthers, but took no joy in the 4-3 victory.

As to what exactly bothered him, Gallant was direct about the defensive issue.

“We’ve been talking about it. Showing video. It seems like we give up the slot shot more than anybody else. It’s frustrating,” he explained.

The head coach recognized that Igor Shesterkin may have given up a soft one late, but he emphasized that his goalie was incredible for two plus periods. I mean, the 25 year-old stopped 42 of 45 shots.

‘We’re still giving up way too much in the defensive zone,” he added.

Per NaturalStatTrick, the Rangers have given up 122 high danger chances against, allowing 14 goals. Only Vegas (146), Detroit (145), and Toronto (127) have more chances against.

In the end, Gallant made it clear what he wants to see. 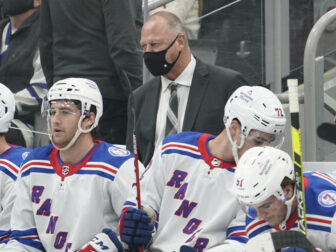 The 33-year-old is operating on the Blues’ first line and has recorded six goals in his first nine games. If St. Louis is going for it, then chances are Perron will not be available. But GM Doug Armstrong is another one not necessarily tethered to orthodoxy, so it could be possible, and certainly so if the Cup does not appear a reasonable objective.

Perron, has 6 goals and 5 assists for 11 points in 10 games this season. He has one year left on a $4M AAV for the remainder of the season before becoming a UFA. 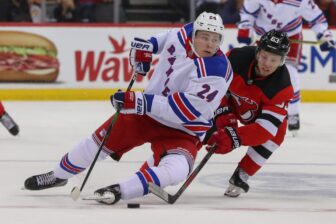 Check out Eichel in a Vegas jersey and Price on the road back for Montreal. Read more.