The New York Rangers held practice today in preparation for their matchup against the Edmonton Oilers. Multiple reports indicate that Igor Shesterkin is the likely starter for tomorrow night’s contest as he was the first goalie off and Alexandar Georgiev was doing some extra work.

Per Colin Stephenson of Newsday, Ryan Reaves looked the best he has since his injury and Alexis Lafrenière practiced with the 4th line today.

Keep in mind, that today’s practice lines are not set in stone as the lines for the game.

The Blueshirts are off to their best start since the 2016-17 season with 14 points in their first 10 games. That’s due in large part to the goaltending of Igor Shesterkin. Head coach Gerard Gallant says that he will split the back-to-back with both goalies.

Shesterkin, 25, is likely to get the call against the high-powered attack of the Oilers on Friday as he was the first off the ice. Georgiev, also 25, will get the nod against the Calgary Flames on Saturday.

Reaves, 34, looked good at practice but remains on IR. He will be eligible to return for the game against the Oilers. Gallant is not sure he’ll play until the trainers give the green light.

Alexis Lafrenière to the fourth line?

Lafrenière, 20, has three goals and four points in 10 games. For his career, the 1st overall pick from 2020 has recorded 25 points in 66 games. The coach wants to see more, and skated him on the fourth line at practice today.

“We’re not sure what we’re going to do tomorrow about the lineup,” Gallant said. “He’s a young kid, we want him to do better and make sure he’s working hard. He wants to do better and we want more from him.”

The Rangers third line of Filip Chytil, Sammy Blais, and Alexis Lafrenière played okay against Vancouver but failed to get on the scoresheet. Alexis admitted yesterday he needs to be better.

“Yeah, I just like to know what I’m doing wrong on the ice,” he explained. “It’s good for [Gallant] to tell me what to improve so I can apply it on the ice and be as good as I can.”

When Gallant was asked if this was a message, he deflected the notion. “No, it’s about us trying to win games and putting him in the best spot available, so not really a message,” he explained. “Coaches make up lines every day. If he takes it as a message, that’s great but I just want to put our best lineup out there.” 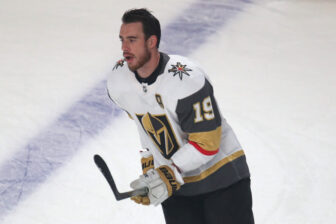 Anatomy of the Jack Eichel trade

Jack Eichel was traded to the Golden Knights, but two other teams were in the mix this weekend. Read more here.