The Rangers have updated their current COVID protocol list with defenseman Jarred Tinrodi being added and Patrik Nemeth cleared to play.

Nemeth remained on the protocol yesterday, but is now ready to join the team. He partnered with Nils Lundkvist today at practice. Yesterday, Tinordi was in that spot showing just how quickly things turn on a dime in the NHL these days.

“Good to go,” Nemeth said after practice. “I had some symptoms for two to three days, it wasn’t that bad.”

Rangers expect to make a call-up from the Wolf Pack

Earlier this morning, Keith Kinkaid was recalled from the Wolf Pack to take Alexandar Georgiev’s spot.

NY Post reporter, Larry Brooks indicated that the Rangers will be making another call-up for a defenseman after Hartford completes COVID testing today.

While there’s likely some consideration for Zac Jones, a healthy Libor Hajek is ready to take Ryan Lindgren’s place alongside Adam Fox.

“He’s played steady, he moves the puck well,” Gallant said about Hajek. “Now that he’s got in– he’s played solid hockey. He’s going to get another opportunity to play big minutes.”

Anthony Bitetto makes the most sense to act as the 7th defenseman at this time.

The defenseman from Long Island, NY had a nice run with the team last season collecting 4 points in 14 games. He provided a few sparks and was great for the locker-room. His NHL experience also spans 197 games.

This season in Hartford, Bitetto has three goals and no assists in 10 games with a -3 rating. 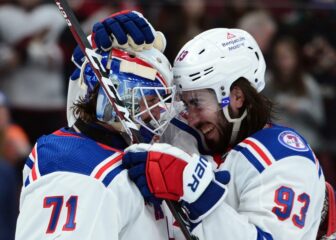 Also Read:
New York Rangers will have taxi squad as an option when they return